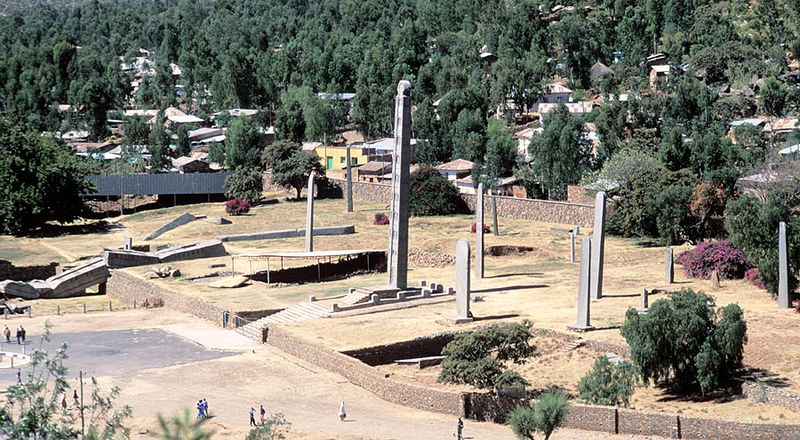 An Empire in East Africa experienced a legendary ascend in the ancient world. The kingdom located at the horn of Africa was called Aksum, the first Christian kingdom. Soon after its foundation, Aksum rose to be one of the four great powers in the ancient world. In the picture on the right you can see today’s Aksum with the Stele Park from the time of king Ezana, the founder of the Empire.

Aksum was located in the North of the Ethiopia of today. Safely it lied in a valley, surrounded by two small rivers. Old travel reports say that the area around Aksum was fertile land, where it rained a lot. It actually was so fertile, that people from southern Arabia immigrated to the region. Many pre-Christian temples and thrones made of stone are reminiscent of that period in time. Aksum once used to be the residency of a king, yet through its brisk trading activity it soon rose to be a global empire.  The harbour town Adulis at the Red Sea was part of the empire. Going through Adulis, goods were shipped to Arabia and India.

Aksum- the first Christian Empire in the World

350 AN, King Ezana declared the Christian religion as state religion. Aksum became the first Christian Empire in the world. It was also the first empire south of the Sahara desert to have its own coinage! In its period of prosperity, Aksum was counted as a world power, next to China, Persia and Rome. After many years of drought, the empire perished 800 AN. Today, the Stele fields and sepulchral monuments are reminiscent of the empire. The last emperor of Ethiopia, Haile Selassie I. (1892-1975) claimed that the empire’s origin lied with the queen of Saba. He claimed to be a direct descendant of the legendary queen and king Salomon. In Addis Abeba are supposed to be ruins of the former palace of both the rulers.

Queen of Sheba and Queen Gudit

The queen of Sheba and her son Menelik founded the empire. Menelik brought the Ark of Covenant into the empire. It is believed that the stone tablets with the Ten Commandments, which were received by Moses from God, are located inside the Ark of Covenant. The Tablets of Stone symbolize God’s presence among the people on earth. Hence, the Ark of Covenance, which was shrouded in mysteries, was the most valuable item of the Original Christians. Today, nobody knows if the Ark of Covenant exists and where it is actually located. The belligerent queen Gudit from the Shewa Empire ruled at the end of Aksum. She was a feared warlord, yet a miserable regent. Her rule marks the end of the Aksum Empire. The enormous amount of legends is reminiscent of this turning point in this country’s history. Even today, the Ethiopians regard Aksum as a sacred city, because the Ark of Covenant is said to be preserved in the church of St. Mary of Sion.

More on the Legend of the Queen of Sheba.