Madagascar is a beautiful island just off the coast of East Africa. It is home to an amazing variety of wildlife. It is the only place in the world, where you can find lemures. Do you recall the Disney movie Madagascar? Thanks to Julian, Maurice und Mort lemurs have become famous all over the world.

Lemurs are Old World primates and look like a cat crossed with a squirrel. They are unique to the island. You can find over 60 different kinds of lemurs in Madagascar. But, you won't find any other primates, no monkeys, no chimps, no gorillas. Why? The lemures can give an answer to that question, and besides reveal some interesting facts about the history of our planet.

Lemures, the clever primates of Madagascar

Let's take a look back in time. Until around 160 million years ago, Madagascar was attached to the African mainland as part of the super continent Gondwana. As Gondwanaland broke apart, Madgascar moved away from Africa. The first lemur-like primates appeared roughly 60 million years ago. Did they cross over to Madagascar shortly thereafter, or have their predecessors already lived there? No one knows for sure. 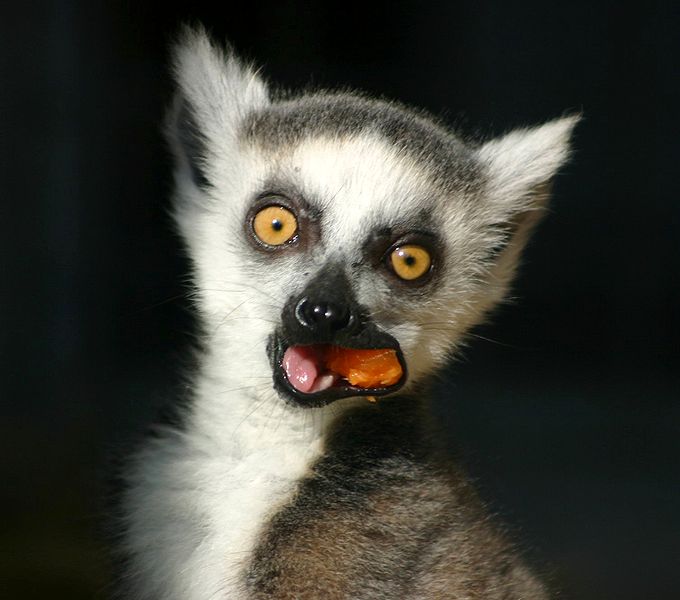 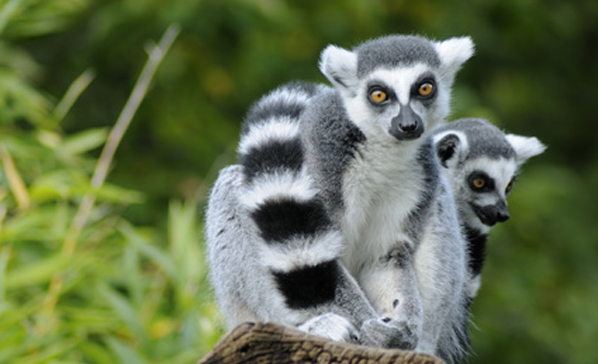 Today Madagascar is home to nearly 60 kinds of lemurs. The largest family of lemurs includes the ring-tailed lemur. It is recognizable by its long, black-and-white-banded tail, much like that of a raccoon. It is active in daylight hours and likes to take a sunbath in the morning. It is highly social, living in groups of up to 30 individuals. The females are dominant, like most other lemurs. To keep warm and reaffirm social bonds, groups will huddle together. The ring-tailed lemur prefers the dry parts of Southwestern Madagascar, spending most of its time on the ground. It likes to eat fruit

The indri is the largest of all lemurs. It lives in the trees, and can be easily spotted because of its black and white coat. It is best known for its eerie, yet beautiful song which can carry for more than 2 km. The indri is active during the day. He starts the day with sun-bathing, he faces the sun from a tree branch, his eyes half closed  and his hands low with palms facing out. That's why the Malagasy do think, he worships the sun. Across Madagascar, the indri is revered and protected by taboos. The indri likes canopy fruits and leaves. He lives in small family groups, which are quite vocal. They communicate with other groups by singing and roaring. When confronted with danger The indri will bark, when affectionate he will make kissing sounds. Like a monkey the indri is leaping from tree to tree, jumping up to10 m between tree trunks. Indris are rare lemurs, due to their low birth rate. Every three years, an indri gives birth to one baby, that is why today the indri's numbers are small.

The Aye-Aye lives on trees

The Aye-aye is one of the world's most bizarre creatures. It has huge eyes, rat-like teeth, large bat-like ears and a long middle finger. Aye-ayes are nocturnal lemurs. They are the only primates that use echolocation to find their prey; with their long middle fingers they tap on trees and listen for wood-boring insect larvae, using the same finger to dig them out of the tree when it finds them. Aye-ayes are only found in Madagascar. These primates are well-adapted to life in the trees. With their big toes and tails they hang from branches. Their bizarre appearance and behavior has caused the Madagasy to consider them an omen of bad luck, that's why they are endangered. 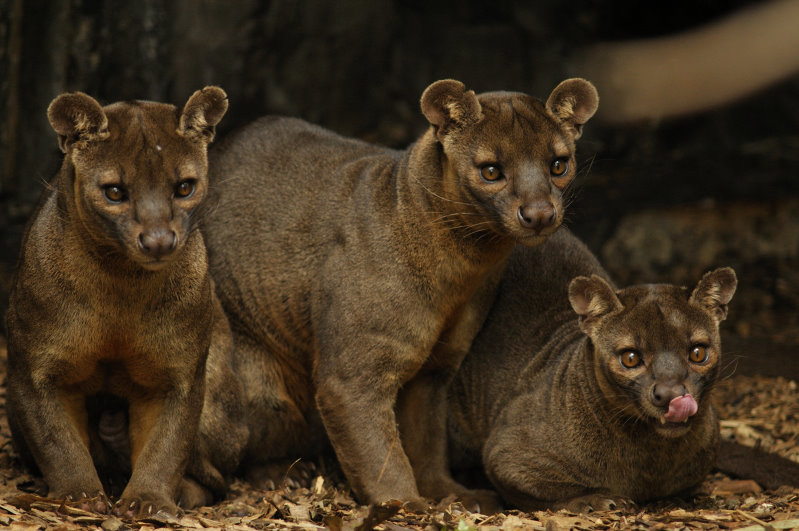 Fossas live in the woods of Madagascar. They look like cats, but have a doglike snout. Infact, they are members of the mongoose family. They are one of the few predators native to Madagascar. Fossas are Madagascar’s largest mammalian predator, reaching up to two meters long from snout to the tip of the tail. Fossas are active day and night. Over half of their diet consists of lemurs. They also eat reptiles, birds, other mammals, and livestock. They’re excellent climbers, with their long tails giving them excellent stability when moving from branch to branch. Their claws are retractable, meaning they stay sharp and aren’t worn down on their travels. Unfortunately, fossas are becoming increasingly rare; not only do humans kill them for attacking livestock, but they’ve also destroyed 90 percent of the fossa’s habitat.

Chameleons are small reptiles that are famous for their ability to dramatically change colors. A chameleon  does not change colors to match its surroundings. The color is like a language, it is used to convey emotions, defend territories, and communicate with mates. Chameleons have bulging eyes that move independently of one another. Their feet are fixed in a grasping position, many species also have horns on the heads. Some species have long extensile tongues for catching insects. They wait for prey to pass within range of their long tongues. The tongue creates a suction effect when it hits the prey.

Chameleons are diurnal, solitary, and often aggressive towards members of their own species. Chameleons have a bizarre way of moving in which they slowly rock back and forth between each step taken, often in time with the movement of nearby leaves being blown by the wind. Most chameleons lay eggs. Panther chameleons change color according to their mood, like other chameleons, but these particular chameleons are usually vibrantly colored, especially the males when courting.

Madagascar is thought to have more than 300 kinds of frogs, almost all of which are endemic. Frogs are the only amphibians found in Madagascar. Unfortunately, mantella are among the most popular of Malagasy frogs in the pet trade. 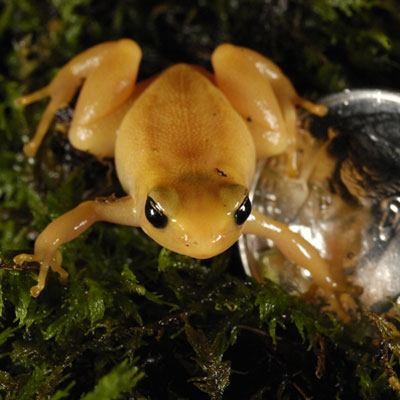 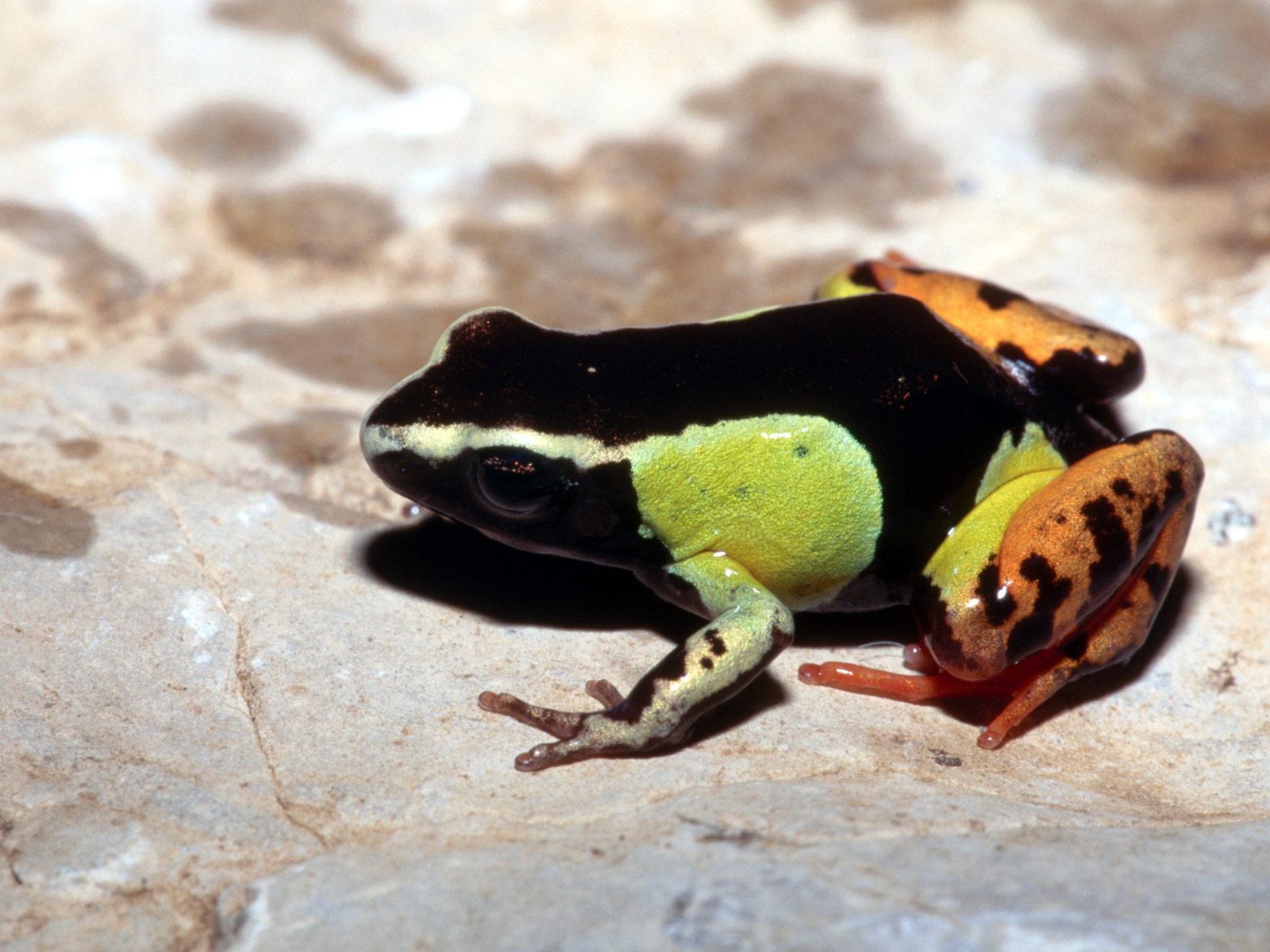 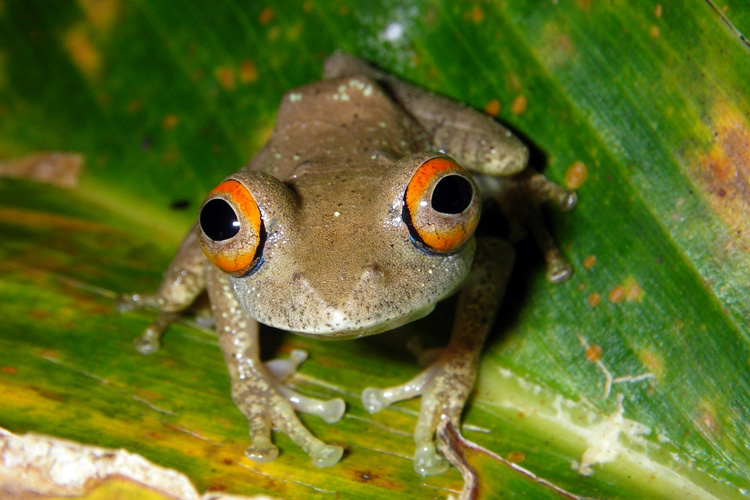 These strikingly beautiful frogs use bright colors to advertise their toxic skin secretions to predators. Using an opposite survival strategy are the Mantidactylus, which rely on cryptic camouflage instead of gaudy colors. Madagascar is also home to tree frogs and a group of toad-like frogs including the Tomato frog, which releases a sticky glue-like secretion that protects it against colubrid snakes, cats, and dogs. The secreted substance can produce an allergic reaction in humans as well. 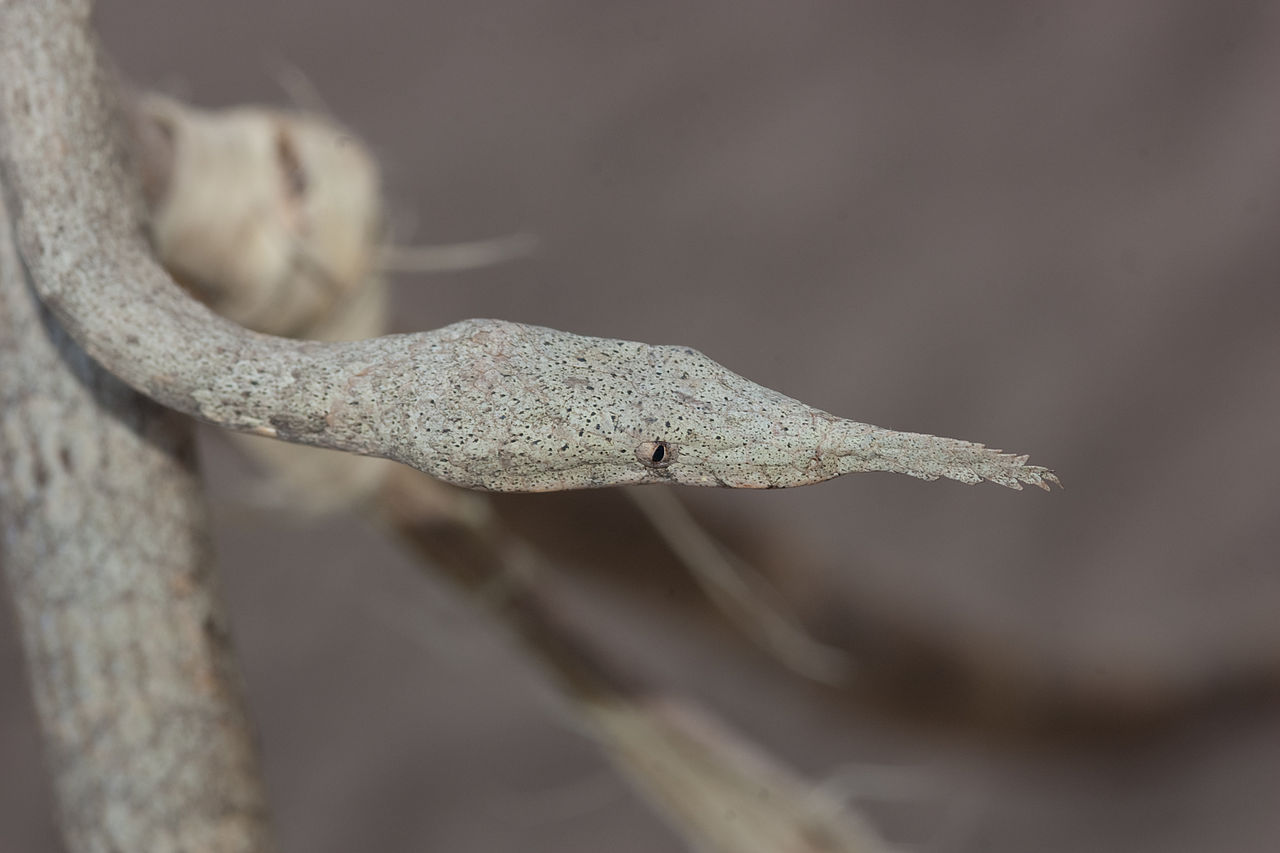 The vast majority of Madagascar’s snakes are unique to the island, but few are so strange to the eye as Malagasy leaf-nosed snakes. These snakes, which like to hang from branches high in the trees, have bizarre nasal appendages protruding from their faces. Leaf-nosed snakes are unusually sexually dimorphic for snakes; females can be clearly identified because their nasal protrusions are more elaborate and serrated, while the males have longer appendages. These protrusions are present from birth, so it is believed they are used for camouflage purposes. When the snakes lie still, their nasal appendages resemble leaves, so that the arboreal lizards they prey on don’t see them until it’s too late. 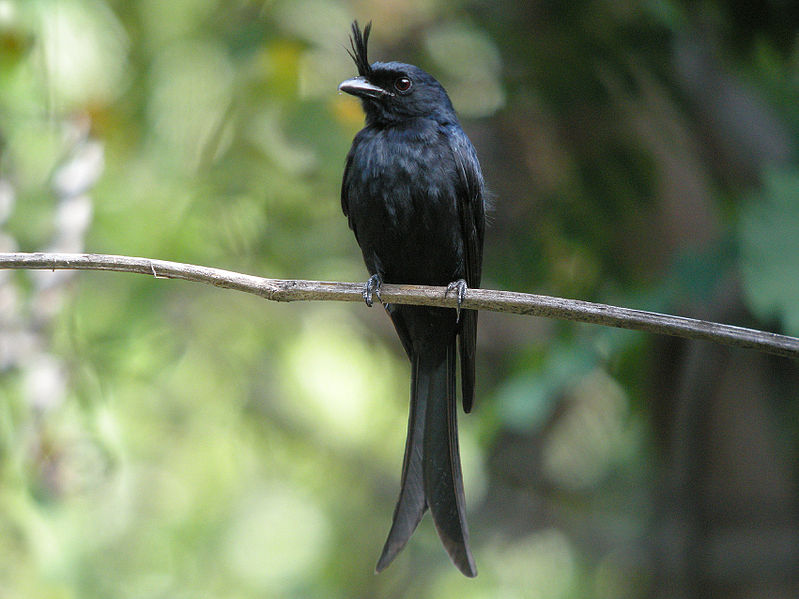 Birder have counted more than 280 different kinds of birds in Madagascar. Some of the birds are very colorful such us the blue vanga, some have very special talents, like the Madagascar drongo. He is the only bird on our planet that can meow, bark or cackle. He can imitate the voices of various animals of other species and also the sounds of humans. Madagascar drongos are tricksters. They make false alarm calls, causing their listeners to drop whatever juicy morsels they were dining on and flee the scene. Meanwhile the deceptive birds have swooped in and made off with their victim's meal. Indeed drongos are notorious among wildlife observers for their thieving ways. But sometimes the birds call "hawk" too often, and they discover that no one's paying attention.

Comet moths, also known as Madagascan moon moths, are among the world’s largest silk moths. Their brightly colored wings can reach spans of 20 centimeters, while their namesake tails can grow up to 15 centimeters . The good news for moth haters is that once these moths reach adulthood, they cannot feed and only live for four to five days. The bad news is that they’re capable of reproduction from the first day they emerge from their cocoons, and females can lay up to 170 eggs. The comet moth caterpillars feed on fresh eucalyptus leaves and have a pupation period of between two and six months. Their cocoons have small holes in them to prevent drowning in the wet rain forests. 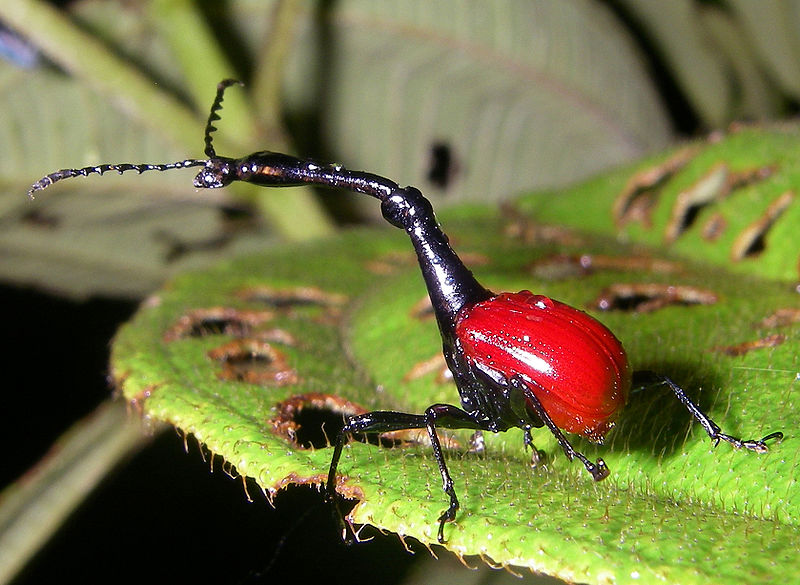 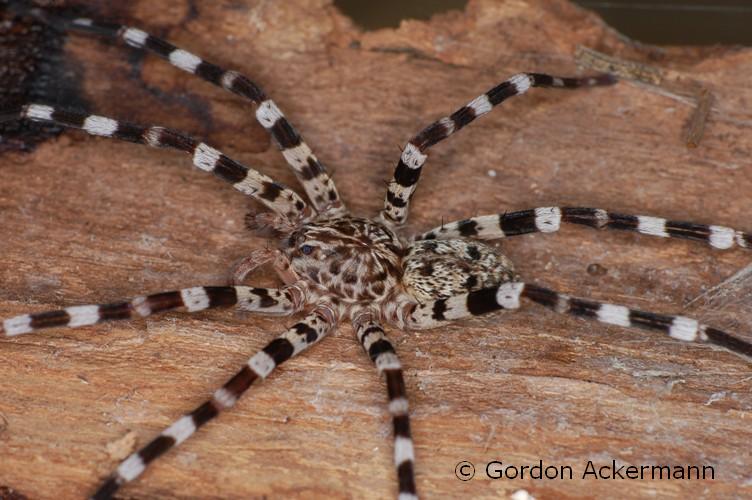 The Darwin’s bark spider is black with white hair on the abdomen. The female are much bigger than the males, which are one-fourth of the female's size. It produces one of the largest orb webs. The webs are incredible strong. The anchor lines are spanning up to 25 metres. Only recently discovered, this spider’s silk is the toughest biological material ever discovered. The spider's silk is the 10 times stronger than Kevlar and twice as tough as any other silk. Their webs can reach gigantic sizes; orb webs can cover three square meters and are often suspended over rivers or streams up to 25 meters across. Webs have been discovered with over 30 prey insects, mainly mayflies, trapped in them. The unique strength and size of the webs mean they can be placed where no other spider could live, reducing competition for food and space.