The Okavango Delta is one of Africa's  natural wonders. It is a large inland delta in the Kalahari, formed by the Okavango river. In the heart of the Kalahari desert the river has formed a paradise for animals of all kind. The swamps are home to crocodiles, hippos, snakes, and   birds. During the dry winter months from June to August, the Okavango produces a seasonal flooding.

The delta swells to three times of its permanent size. Just like magic, thousands of square kilometers of dry bushland turn into a flourishing waterworld. It is attracting animals from the desert around the delta. This is the time for a safari. Best is to go with a guard in a little boat. The guards know the best places where to spot what kind of animals and also they know quite a bit about the habits of the animals. In no other place of Africa you will find more and various animals than in the Okavango Delta.

Immigrants from the Kalahari

Bush elephants are the first to immigrate from the arid region that surrounds the delta. These large herbivores consume huge quantities of forage and fodder and can modify the environment, keeping channels open  and felling large trees. They occur in herds of several hundred led by matriarchs or smaller bachelor herds. The elephants are followed by buffalos, antelopes, wildebeest, giraffe, lions, cheetahs, leopards and hyenas. Even the endangered wild dogs are roaming the delta for prey.

The most populous large mammal is the lechwe antelope, with more than 60,000. Only the males have horns. The lechwe antelope has elongated hooves and a water repellent substance on its legs that enables rapid movement through knee deep water. They graze on aquatic plants and take to water when threatened by predators , like the waterbuck.

The big mammals are followed by hyenas, wild dogs, leopards and lions. They all are struggling for their share on the shores of the Okavango Delta.

Ibis and storks are wading through shallow waters preying on frogs, crayfish and worms. Brightly coloured kingfisher are hunting fish, fish eagle are circling in the sky. The African Sacred Ibis is a wading bird. It has a bald head and neck, thick curved bill and black legs are black. The white wings show a black rear border in flight. Sexes are similar, but juveniles have dirty white plumage, a smaller bill and some feathering on the neck. This bird is usually silent, but occasionally makes some croaking noises. The sacred ibis was formerly found in Egypt, where it was venerated and often mummified as a symbol of the god Thot. 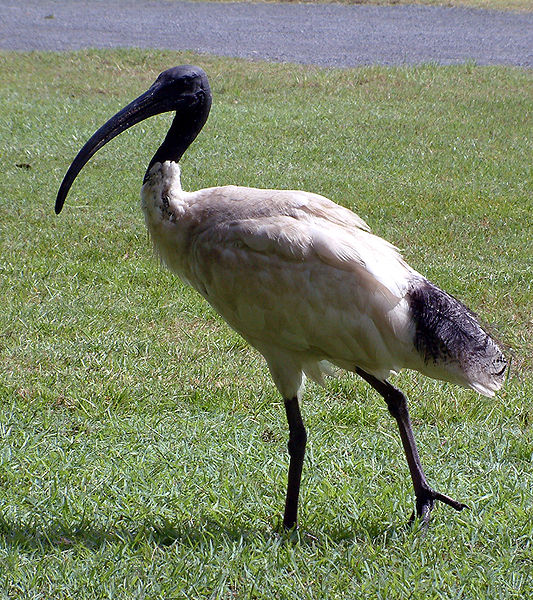 The bird nests in tree colonies. It builds a stick nest, often in a baobab tree and lays two or three eggs. It feeds on various fish, frogs, small mammals, reptiles and birds. The kingfisher is the most prominent bird in the swamps because of his colourful feathers. His diet includes fish and insects. Many legends are told about this beautiful bird, his feathers are used as lucky charm.

Nile crocodiles are retiring animals, often seen slipping into the water as people approach. Despite limited hunting in the Delta, the population is not dense. Reproduction suffers from disturbance of nesting sites, burning and the trampling action of cattle. Often, water monitor lizards dig up nests to eat the eggs. That's why only 2 percent of all eggs laid hatch into young crocodiles. The young are feeding on insects and small fish, whilst the biggest take large fish, and mammals.

Did you know? Crocodiles are consuming stones to be able to dive deeply in the river.

The Okavango Delta is home to over seventy fish species including tigerfish, African sharptooth catfish and sichle barb. This species is also found in the Zambezi River, indicating a historic link between the two river systems.

Dragonflies with their outstretched wings and damsels with theirs folded are one of the best understood small groups in the Okavango Delta which is home to over 99 dragonfly species. These vibrant species are drawn to the waters of the Okavango Delta by their need to breed in water, in fact much of their life is spent there as fierce larvae that eat other animals. On the right you can see migrating dragonflies.

Which species are found in a particular area is related to water availability and flooding. For example, dragonflies around temporary pools are typical of the species found at short lived rainwater pools in the dry Kalahari. These species live only 30 days after the eggs have been laid. Those insects living on the permanent waters require water throughout. The greatest variety of species are found where both permanent and temporary waters are close together. On the left you can see a damselfly.