Let' s go on Safari in the desert and find out which special abilities enabled the inhabitants to live under the harsh circumstances of the Sahara.

Most often associated with the Sahara are camels or dromedares. But dromedares are no natives of the Sahara. They were introduced to the Sahara by arabic people around 200 A.D. At that time camels had been already domesticated and used for transportation. They replaced horses because they have soft feet that are aligned so that they can move easily through sand. And also they have the ability to go for up to 17 days without water! They even can drink salt water. They are called ships of the sahara because for a long period of time camels were the only transportation system of the Sahara. But there is one more reason: their way of walking. Both legs on the same side rise and fall together. This leg action produces a swaying motion that makes some riders seasick.

The Addax Antelopes - the waterfinders in the desert

These kind of antelopes are also known as the screwhorn antelopes. They are the Sahara's largest indigenous mammal. It travels in small hers thoughout the Western Sahara. It can live without water for a long period of time. It sucks moisture from the desert grasses and bushes. But sometimes they do need water. Fortunately they have the very rare ability to smell water. They can smell rain even if it falls 200 kilometers away from the place where they are. It has oversized hooves which make the addax adept at moving through the loose sand. Due to overhunting the addax are critically endangered.

The fennec foxes are small but their ears are pretty large. The big ears help them to release body heat, keeping them cool. But also, their big ears help them to hear better in the desert, to spot their prey in the night. This is important, because the fennec is a nocturnal animal. Fenecs live in families, they dig out dens in sand for protection, which can be as large as 120 square meters. Fenecs are the national animal of Algeria, and also the Algerian national football team is called "the Fennecs".

The jackal is living in open grasslands and lightly treed country. He lives singly or in pairs. If you want to see a jackal, you should go on safari at dusk. At that time you can hear his friendly howling call and soon find him. Jackals are wily animals and run quickly and lightly. They hunt from a lair in a sheltered hole, often near water, where he is waiting for prey. He is not very picky, he eats small rats, birds, chicks and even insects. 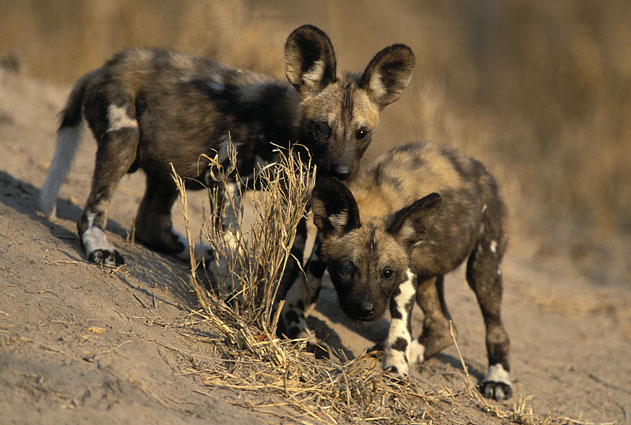 The wild dog is a typical inhabitant of the Sahel. He has a characteristic: His ears are large, and round. Like the jackal it roams in open grasslands. Wild dogs live in packs of up to 30 and are well organized. One or two femals acts as baby-sitters to the pups while the rest of the pack go hunting. Old, sick members are also cared for, which is quite unusual in the animal world. Their prey are small antelopes, sometimes they hunt zebras. They perform the important task of culling sick animals before infection can spread.

Birds of the Sahara

The Sahara is home to the black and white martial eagle. This large bird lives in the semi-deserts of the Sahara throughout southwest Africa, and is commonly found in Zimbabwe and Namibia. This predator weighs up to 13 pounds with a wingspan between 6 and 9 feet. The martial eagle preys upon small animals including impalas, hares, baboons, mongooses, and tiny antelopes.

The Ostrich - the biggest bird of the Sahara

You wouldn't think of ostriches when asked to name a desert animal. But infact, ostriches are the fastest animals in the Sahara. The are able to run up to 60 kilometers an hour, almost as fast as gazelles.  The ostrich is an endangered species that roam around the Sahara Desert. They can eat grass seeds to survive. They have long necks to watch potential threats coming its way. When threatened, the ostrich can fight bakc with its long legs. But almost always he prefers to run away. The ostrich doesn’t need water but will use it if available.

Amphibians and Reptils of the Sahara

The desert is home to a lot of reptiles and snakes. The reason is that these animals are quite well adapted to the dry conditions. They don't need to drink water. By consuming their prey they get the necessary liqidity.

The monitor lizard lives in rocky areas of the Sahara. It can become 20 centimeter in length. It is venomous and can become quite aggressive when threatened, especially during colder seasons. They are eating eggs, smaller reptiles, fish, birds and small mammals. Monitor lizards not only include desert-thriving species in the Sahara, but also species which can live in forests or even wetlands. This makes them some of the most versatile creatures on the planet. They are pretty intelligent and can even count.

This type of scorpion is translucent and yellow in appearance. Many people think they look like toys due to the elastic looking yellow or green coloring. They have limbs that are thin and lanky which is very different from the thick and stalky ones that other species of Scorpions display. You will find that the coloration of the Scorpions depend on where they live. They want to blend into their surroundings, to be as undetected as possible. Death Stalker Scorpions are among the most venomous animals of the Sahara. They look ephemeral and fragile, but they are incredibly dangerous, Their venom can cause respiratory failure and death. The good news though is that many studies have occurred regarding the use of this venom for positive medical care.

This horned viper is a venomous viper with horns, one over each eye. It is found throughout the Sahara. They love sandy, dry areas, and often live around oases. Near human settlements they can easily find their favorite prey which are lizards and rodents. They move about by sidewinding. The sideway movement helps the viper to traverse the hot sands quickly. They are abmush predators, lying submerged in the sand waiting for prey. When approached, they strike very rapidly. They hold on to the captured prey until the vernom takes effect.

Insects of the Sahara

The scarab beetle was a holy symbol to the ancient Egyptians. He is also known by the name "dung beetle" and was valued because of some impressive adaptability. Dung beetles make creative use of animal feces. They are able to subsist almost entirely on animal waste. There are several ways that scarabs can make use of the dung they find. They can roll dung until it makes a ball shape and then push it home. If the way home is long they simply dig a new burrow next to a heap of dung to live in. Some dung beetles just burrow into the dung they find and make it into a home, chewing their way out when they get hungry.

Their sense of smell is not very well developed! Fortunately, all of this activity helps to break down animal waste in the desert. Their work is rather essential, given the lack of rain to otherwise dissolve the waste into the sand.