In southern Africa you will find almost all African landscapes: savannas, mountains, deserts, woods and costal areas. This is why you will find there a great variety of wildlife. Thanks to the foresight of conservationists many national parks have been have been set up.

The most famous one is the Kruger Park in South Africa. In these parks the wildlife is protected,  and rare animals are being brought back from the brink of extinction. Rangers are watching over the wildlife and make sure, that no one is hunting in these areas.

On safari in southern Africa you can be quite sure, to watch the "big five": elephant, lion, rhino, leopard and buffalo. And also giraffe, hippo and many other real big animals.

One of the most endangoured species is the rhino. Two rhino species live in Southern Africa, the white and the black rhino. The difference between them has nothing to do with their colour. Both kinds are of grey-brown colour. But white rhinos are larger than black rhinos. They hava a broad flat mouth which aids in feeding off large quantities of grass. Black rhinos have a small hooked shaped mouth for feeding on trees and shrubs. They seldom join up with other animals. White rhinos live in small herds with several females and a dominant bull. On safari you will spot more often the white species, because they live in open grasslands. The calf normally runs in front of its mother, with the mother using her horn to direct the calf by tapping it on the rear. The white rhino is less aggressive than the black one, but there are more incidents of them attacking people as they have a higher population.

Waterbucks are big, strong-looking antelopes. Coats are reddish brown, with a shaggy mane around the neck. The males carry long, heavily ringed hornes. They live in grassland and tree savannas near by water. They like to eat reedy growth on the edge of dams and swamps. They live in small herds of about 20 individuals. Males have several females and fight off rivals with their sweeping horns. With their horns they also defend their families from predators, almost always lions. They defend themselves by jumping into the nearest water, submerging themselves with only their nostrils above the surface, and of course their impressive hornes. There is something amazing about them: They seem to have no fear of crocodiles in the water. Why? Possibly it is the strong smell coming from glands in their skin that wards off crocodiles.

The white lion is a relative of the African lion. They are indigenous to the Timbavati region of South Africa for centuries. They are regarded as divine by locals, but were hunted near to extinction by tourists from Africa and other parts of the world. White lions were raised in zoos all over the world, to make sure, that some individals would survive. A white lion trust was founded to protect the white lions in 2003.  Six years later the first pride of white lions was reintroduced to the wild. It was widely believed that the white lion could not survive in the wild. But, on the contrary, they did very well and today some prides strive through the plains of Timbavati, though a large part of the population of white lions reside in zoos. 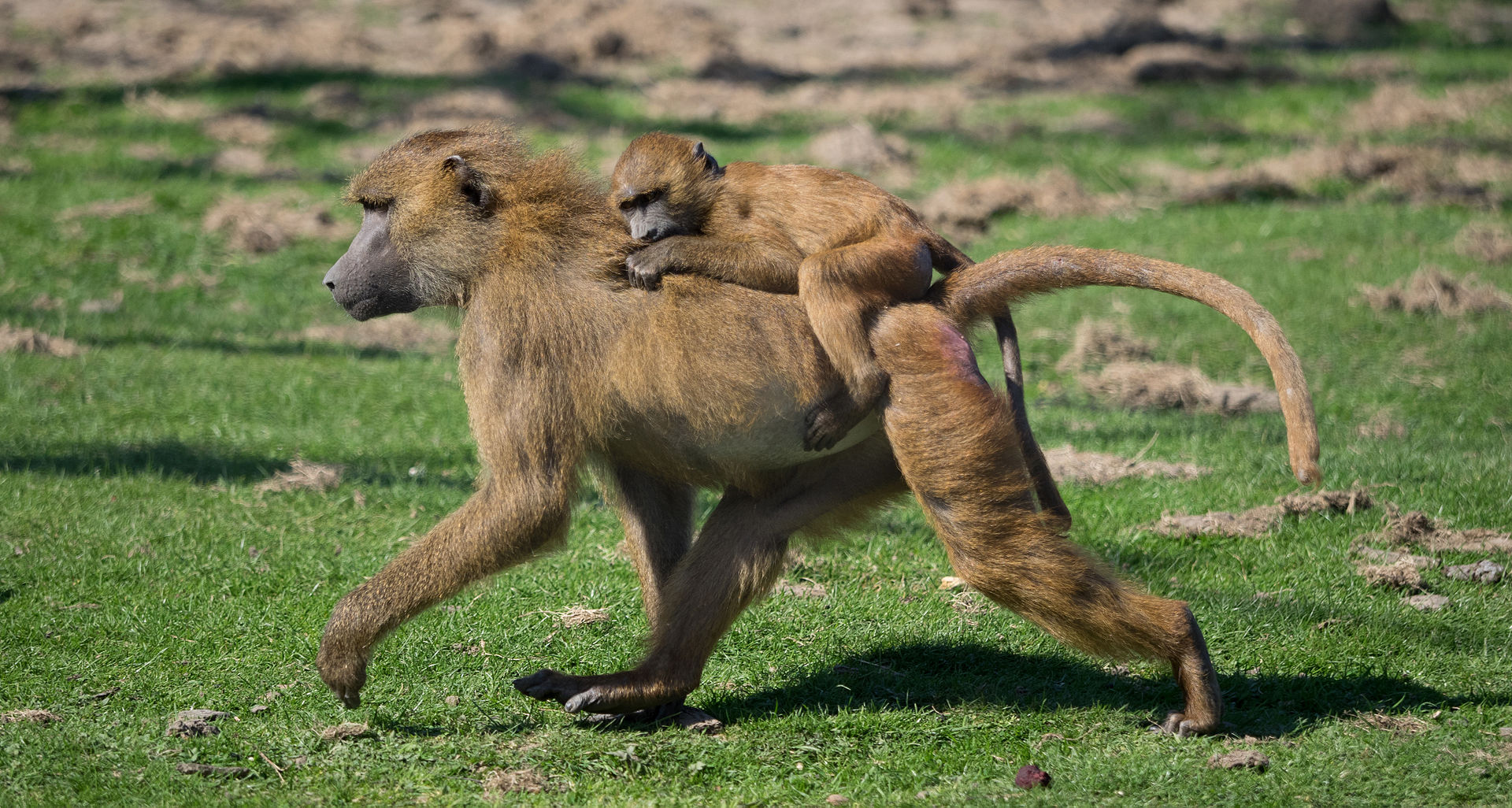 There is no safari without spotting baboons. The curious inhabitants of the savanna are everywhere, where they expect tourists. They can become very aggressive and somtimes are prepared to enter the cars running through their territory. Baboons are known for their distinctive build, including a canine-like maw filled with sharp teeth. Baboons live in big groups together. The females are close to their maternal relatives. They groom them, rest near them and aid them in social conflicts. The mothers care for their children like humans do. Though they are primarily vegetarians, baboons are known to eat fish, insects, shellfish, and other small creatures. Ferociously territorial, baboons are quick to rise and defend their homes from any sort of intruders.

The Nile crocodile is a symbol of Africa. It is found nearly all over the continent, from North Africa to the south, where it rules some stretches of river and lakes. Generally, it reaches 5 to 6 meters in length. The diet of the young consists of everything that lives in water, like fish, amphibians and reptiles. Adults, however, prey on antelopes, buffalos, young hippos, and large cats. Nile crocildes share their food, but they have a strict hierarchy. The biggest and oldest male starts eating, while the younger males and the females have to wait until he is done. Nile crocodile is an ambush predator. It can wait for hours, days or even weeks for the right moment to attack. They are very aggressive. Probably they have killed more people than all other wild animals. The crocodiles lay eggs. At the start of the rainy season, usually from November through December, males attract females by bellowing or slapping their snouts in the water. After mating the female dig hole nests in sandy banks, several metres from the water. The female are guarding the nests., until the eggs hatch. They lead the baby crocos to water. For up to two years they take care of their offspring. Crocos normally dive for only a few minutes, but they can swim under water pretty long. The reason is that they can hold their breath for two hours.

In southern Africa there live a great many species of tortoises. They can be found in many different environments, some live in the water. They have a body encased in a shell of bone covered by horny shields. They can retract the head, limbs and tail inside this shell. There are no teeth in the jaw, which instead has a corny cutting edge. They are vegetarian, eating most kinds of grass, fruit and fungi. During winter most tortoises hibernate in snug-fitting holes which they dig in old termite mounds or banks of earth. There they stay until the first rains of summer wake them up. Tortoises lay eggs in a hole, which they cover over. The young hatch in the next rainy season. They are born complete with a shell and are ready to fend for themselves. Tortoises are the prey of many animals, including eagles, which have learned to drop them from a height in order to break the shell. Their worst enemy is the bush fire, because they move too slowly to escape. On the right you see a baby tortoise on the back of its mother

Birders from around the world come to South Africa to experience the country's great variety of African birds, migrants and birds that only live in Southern Africa. The birdlife ranges from the ostrich, the hornbills and the LBJs, the "Little Brown Jobs". Among the most spectacular birds of South Africa are the cranes, most easily spotted in wetlands. The blue crane is South Africa's national bird. This beautiful bird is also known as paradise crane. It is a ground-dwelling bird. Blue cranes are nesting in the grassy uplands. In the winter they are moving down to lower altitudes. During the nesting season the blue cranes are pretty aggressive to other animals, they even attack non-predatory species such as totoises or sparrows. Even humans are attacked if they approach their nest too closely.