The archipelago of Zanzibar is often called the "Spice Islands". The Zanzibar archipelago exists of several islands including Unguja, Pemba and Mafia. It is located on the Indian Ocean, about 35 kilometres off the coast of Tanzania. It is a semi-autonomous region of the Tanzania.

The photo above shows Zanzibar City from the sea. The building on the right with the tower is the sultan's palace. 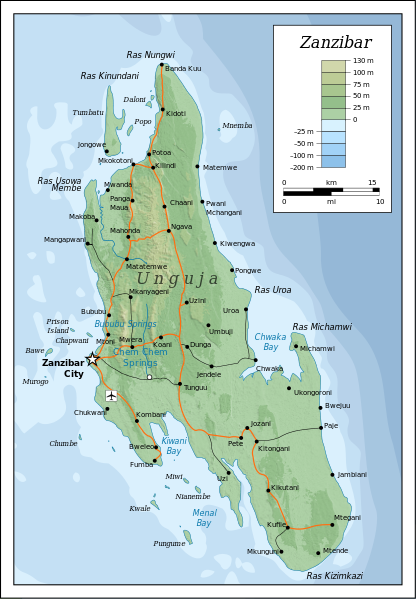 There's the main island actually named Unguja but referred to as Zanzibar colloquially. Zanzibar is with 1658 sqare km half as big as Mallorca. With more than one million inhabitants, it is not as densely populated as the island in the Mediterranean. It has a UNESCO World Heritage Site for its capital. The sister island Pemba is famous with its extensive clove plantations. The neighboring island Mafia is known for its majestic coral reefs and whale sharks. The Chumbe Island is a paradise for divers with its beautiful Island Coral Parc. Both Zanzibar and Pemba are believed to have once formed part of the African continent, about 23 to 5.3 million years ago. Zanzibar is a long, low island. Coconut palms and other vegetation cover the land surface. There are small patches of indigenous forest and isolated large trees. This indicates that much of the island was originally covered by dense evergreen forest. The climate is typically insular, tropical, and humid. The “long rains” occur between March and May and the “short rains” between October and December.

The Zanzibar City with the old Stone Town is the capital of the Archipel. It is located on the west coast of Unguja, the main island of the Zanzibar Archipelago. The city comprises of two parts, the old town, which is called Stone Town, and Ng'ambo, which means "the other side". Ng'ambo is the modern part of the city with high buildings, apartment houses and modern shops. 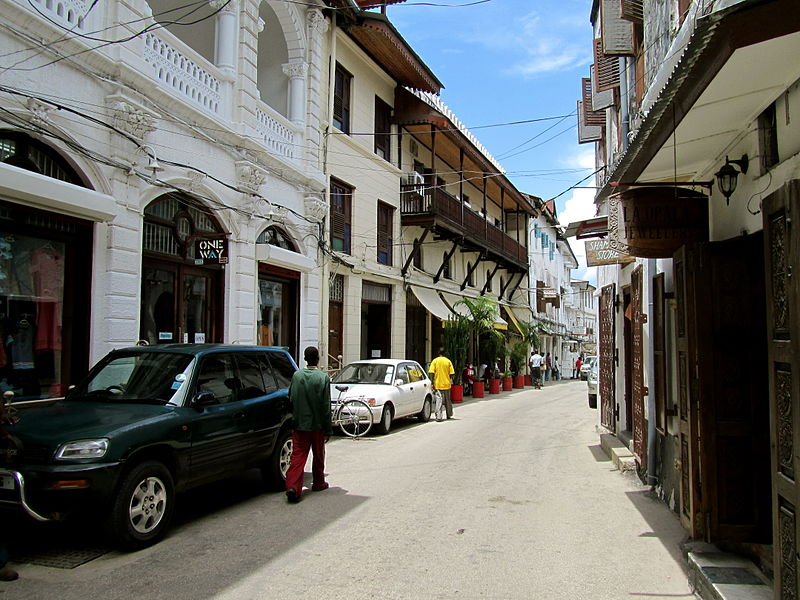 In the centre of Stown Town there is a confusing maze of small streets and old buildings from all centuries. There are Arabic houses with large courtyards, Indian houses with decorated wooden balconies, Portuguese mansions and old forts. In the alleys you can see Indian women in colourful sari, veiled Muslim women and modern African women. Many Africans run souvenir shops, they carve and paint on the street. Little boys in white robes jump out of the Koran school. The girls play with their dolls, which their mothers have sewn from leftovers. 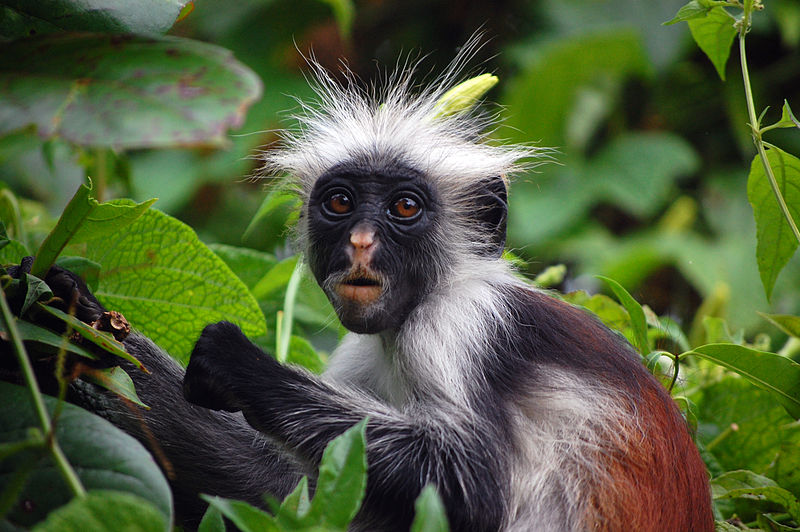 Zanzibar was once covered by tropical rainforest. But a large part of the original forest has disappeared. Therefore, most wildlife is typical of the rainforest. They have retreated into the few forest areas. The major wild animals include leopard, civet cat, mongoose, monkeys and lemurs, the African pig, forest duiker, pigmy antelope, various species of bats and 30 forms of snakes. Most of these animals are typical for the tropical rain forests. Mosquitoes breed during the rainy seasons. On the left you see a Zanzibar Red Colobus Monkey. 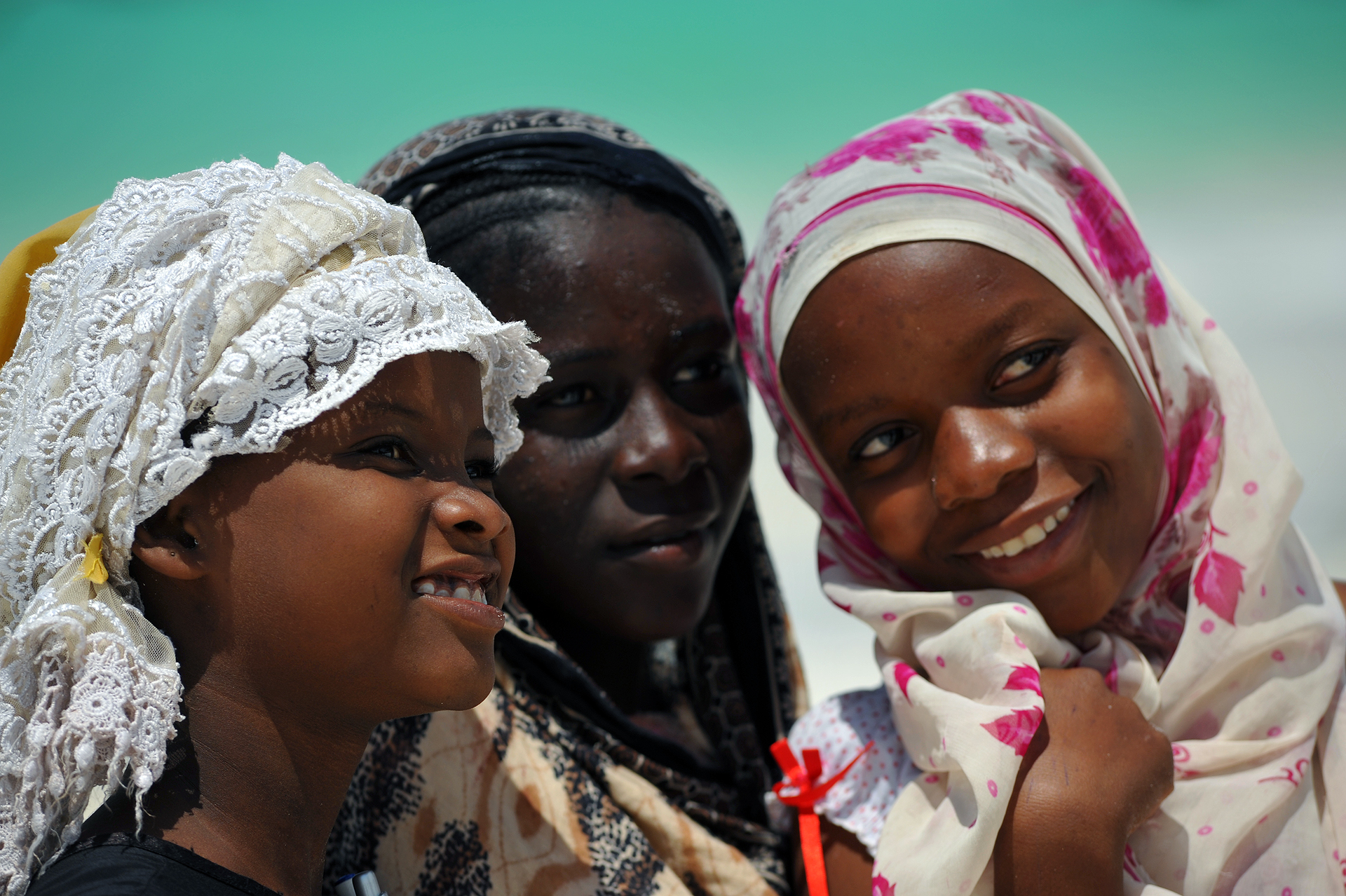 Zanzibar is an Arabic word and means 'the coast of black people'. The southern and eastern parts of Zanzibar Island have been populated by a Bantu-speaking people known as the Hadimu. The northern part of Zanzibar Island was populated by the adjacent Tumbatu. These two groups represent the earliest arrivals in Zanzibar. Throughout the 19th century, notably Arabs populated Zanzibar. With the arrival of the Arabs Zanzibar became Islamic. Mosques were built, Islamic traditions became predominant. Fishing has traditionally been highly important in coastal villages and remains so. The language most widely spoken is an Arabicized form of Swahili. Among the Arabs, the language of the home is usually Swahili. English and Swahili are widely used and understood. 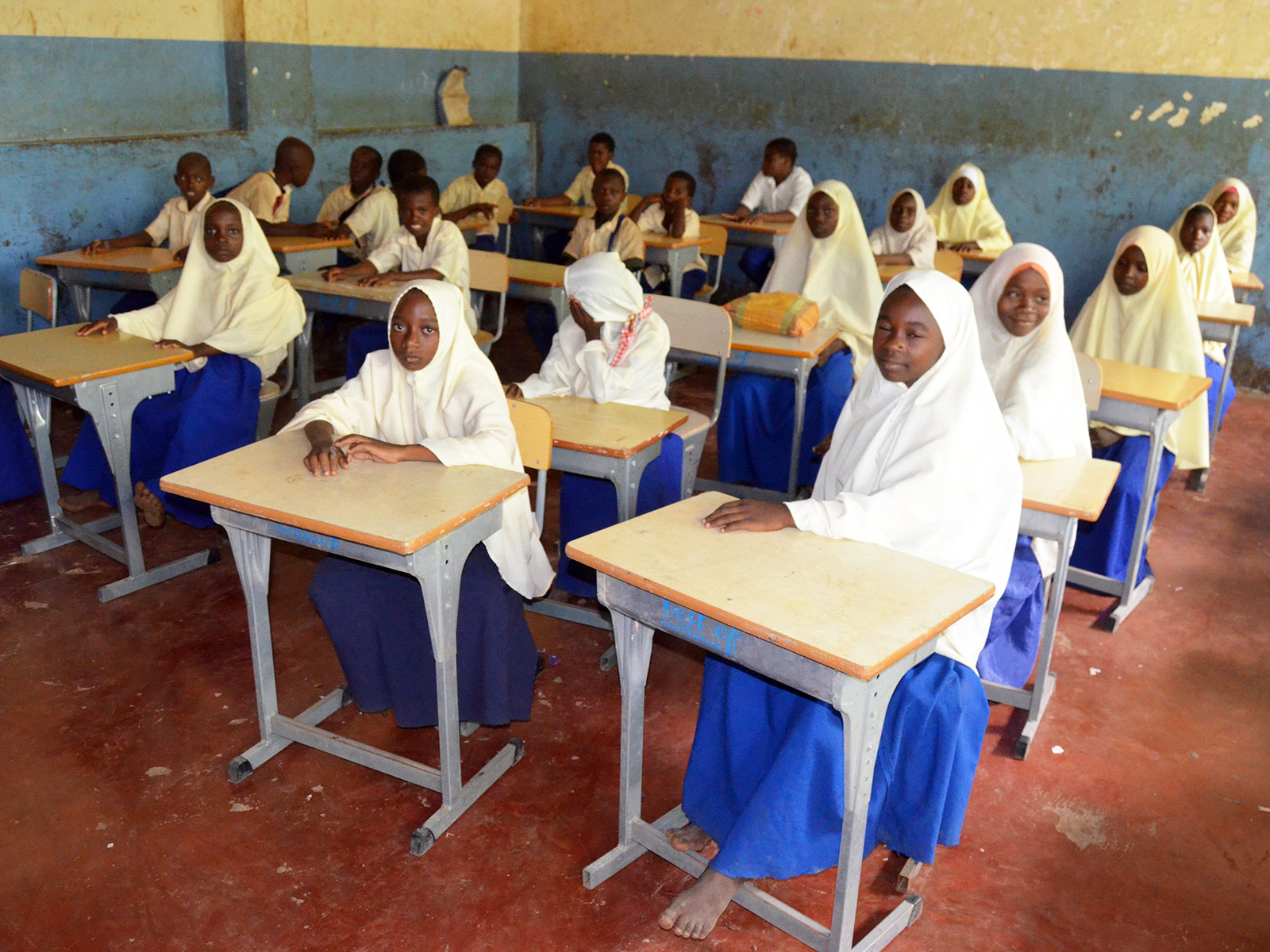 Most children grow up with the islamic beliefs and traditions, which means that the education of girls is very different from that of boys. Girls are prepared for early marriage and motherhood. Their education is not much encouraged. Education is compulsory for the seven years of primary education and also for additional three years of secondary education. The school is free, but learning is not always fun. Often, the classes are overcrowded. In the countryside most of the students have long ways to school. Private schools are better equipped, but for most students unaffordable. There are numerous initiatives by parents and teachers to improve schools. After all, sustainable education improves future job opportunities.

In Zanzibar unfortunately more and more children have no more family. They live on the street and earn a living with simple jobs and begging. It is especially hard for the girls. Once they have stranded on the streets, they soon become victims of traffickers.

The homeless childs form groups, share their earnings and help each other out. Older children look after younger ones and play together. On the streets, they often make lifelong friendships. In recent years the government has tried to take care of street children, but it wasn't not enough. International humanitarian organisations are also involved, especially in providing better accommodation and education. But also they could not much improve child poverty.

Zanzibar was once the trade focus of the region and enjoyed an important entrepôt trade. The island’s economy now depends on agriculture and fishing. Considerable areas of fertile soil and a favourable climate enable the production of a variety of tropical crops, most importantly cloves and coconuts. Local food crops, such as rice, cassava, yams, and tropical fruit, are also important. Fish is an important part of the diet. Local fisheries employ perhaps about one-tenth of the population.

It is said that the islands have the best beaches in the world. That is why more and more tourists visit Zanzibar to enjoy the beaches and the underwater world. Real tourism in Zanzibar did not start up until 1995. In the first years the Zanzibari hoped they would benefit from tourism by getting more and better paid jobs. But a large part of the income flows to foreign companies, which often bring their own employees with them. So the locals are left empty-handed. The government is beginning to rethink its approach towards a more sustainable tourism. 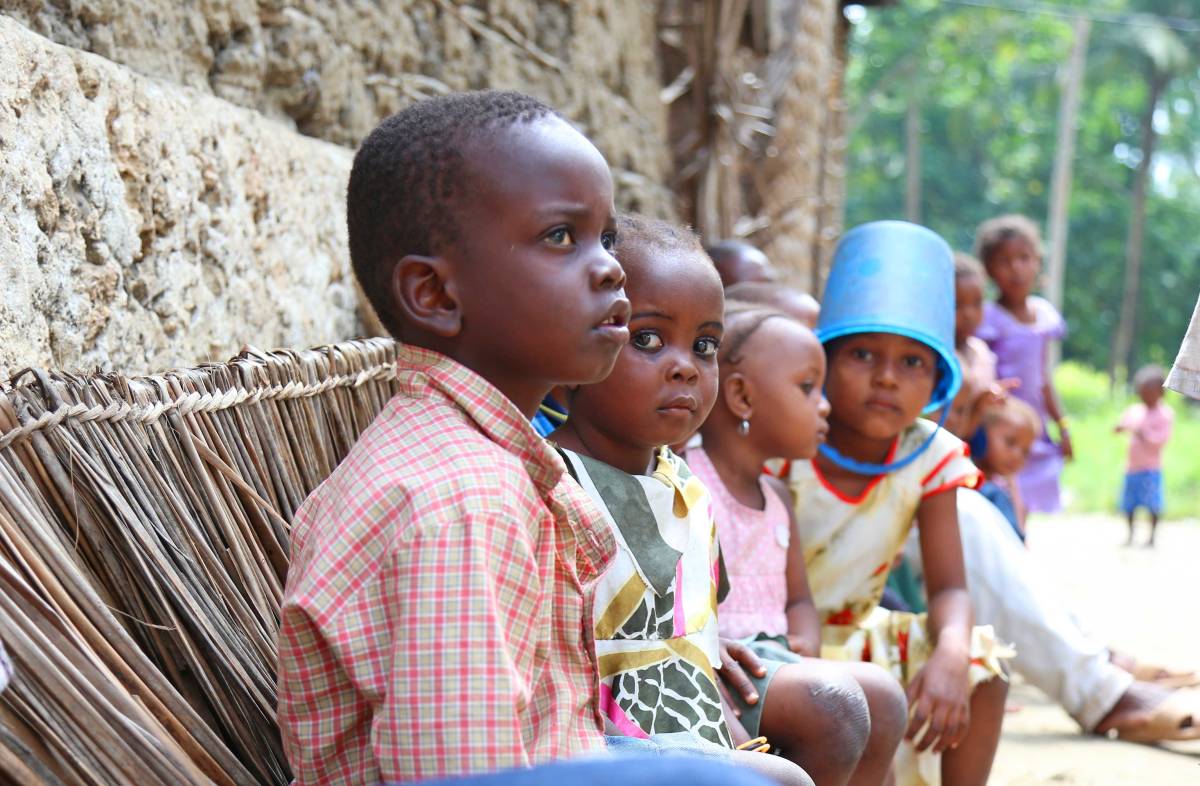 In Zanzibar there is disparity between urban and rural populations. A large part of the rural population of Zanzibar lives in considerable poverty. Most people live from fishing or from agriculture. Their income is often low. About half the population lives below the poverty line. That‘s why not everyone can send their children to school. Although in Zanzibar school fees have been abolished, the costs of books are unaffordable for many. Also the medical care is poor.

The  history of Zanzibar 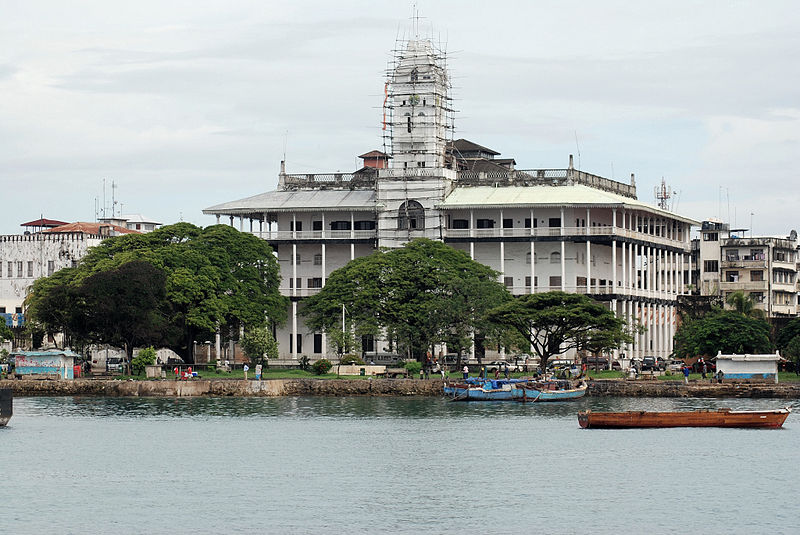 The first mention of the Zanzibar can be found in the writings of the Pharaohs of Egypt since 2500 BC. They have been trading with the Zanzibari since 2500 BC. From the year 700 Arab, Persian and Indonesian immigrants settled on the island. The trade with spices, ivory and the trade with slaves from Africa has driven them to the shores of the island. In 1107 Arabs built the mosque, the first Islamic building in Africa. Later, the Portuguese anchored off Zanzibar. They conquered the island in 1503 and set up a trading post. The Sultanate of Oman recaptured the island in 1698. When the central slave market for East Africa was founded in Zanzibar in 1811, the Sultan of Oman moved his capital there in 1840. Ships from all over the world anchored in the bay of Zanzibar City. Slaves and spices were traded here. Zanzibar developed to an important junction in the Indian ocean trade. The profits from spice exports and slave trade made the Sultanate very rich. In the 18th century  Zanzibar developed into one of the largest slave market in East Africa.

The end of the slave trade 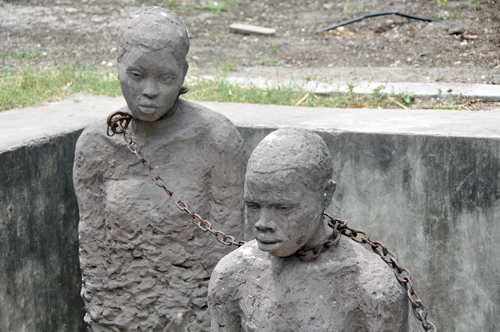 In 1861 Zanzibar was separated from Oman and became an independent sultanate, which controlled the vast African domains acquired by Saʿīd. With the money earned from the slave trade the legendary Stonetown was built with the most modern building in East Africa. The building was equipped with electricity and an electrically operated elevator. The locals called it the House of Wonders because they have never seen an elevator before. In 1890 the British proclaimed a protectorate over Zanzibar itself, which lasted for more than 70 years. One of their first actions was to ban the slave trade. The sultan’s authority was reduced. But Arab merchants secretly continued to trade with prisoners from the African continent. Seven decades later, events began to turn up. On the photo on the left you see the Sultan's Palace in Zanzibar. 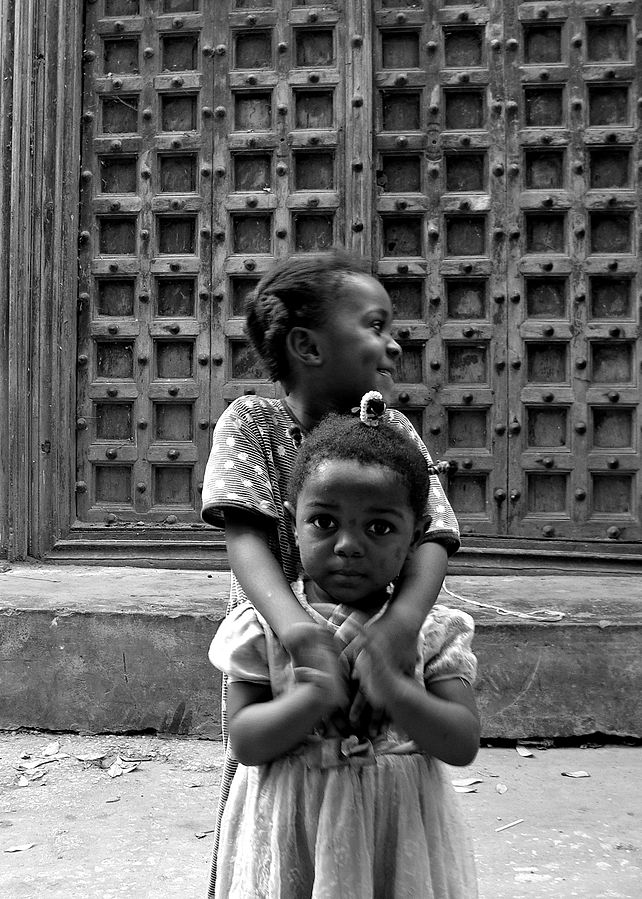 Zanzibar became independent in 1963. One year lalter, in January 1964, a revolt  of the African majority overthrew the established minority Arab ruling elite. The leftist revolution was swift but bloody. As many as 17,000 people were killed. overthrew the sultanate and established a republic. The revolution marked the overthrow of the Arab ruling class by the Africans. In April the presidents of Zanzibar and Tanganjika signed an act of union of their two countries. They created what later in the year was named Tanzania. In 2000, Stonetown was named a World Heritage Site by Unesco as an example of the harmonious coexistence of African, Arab and Indian cultures.