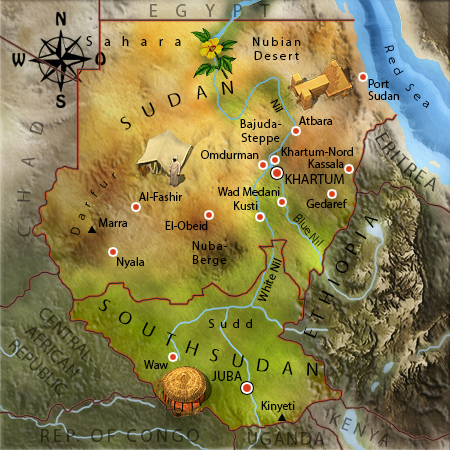 Hello, welcome to South Sudan, the youngest State in the World! 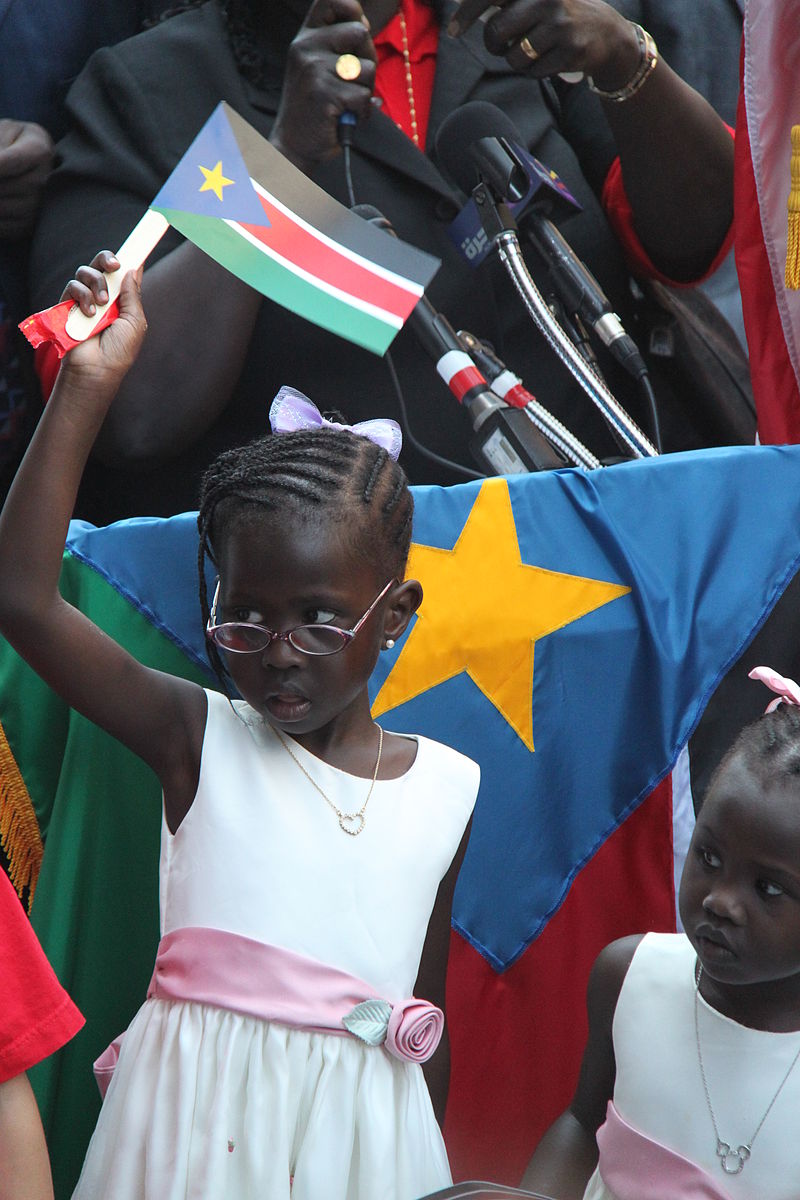 South Sudan was once one of the provinces of Sudan. It has become an independent republic in eastern Africa since 2011. With an area of 620 000 km² it is almost twice as big as Germany and very sparcely populated with only 9 millionen inhabitants. The girl in the picture on the right is prouldy holding the flag of the new state with the colours black, red and green.  A yellow star shines in the middle of the blue triangle.

South Sudan, the Country of the White Nile 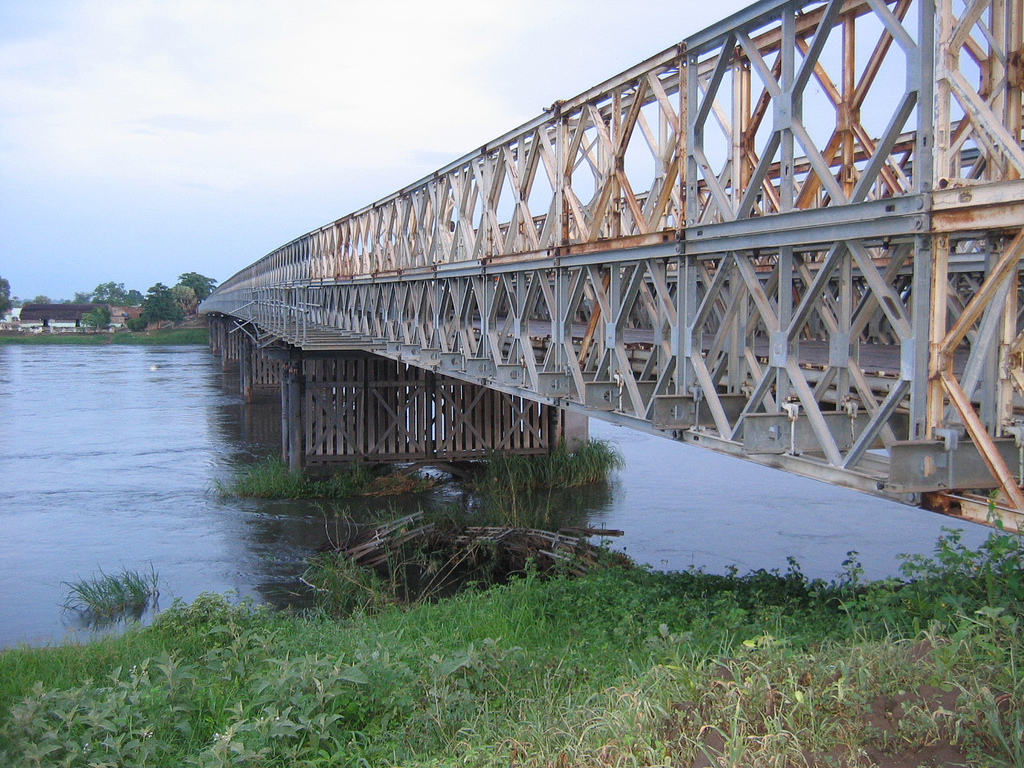 South Sudan is also called „the country of the White Nile“. The White Nile flows through the middle of the country, as you can see on the map above. With its tributaries, the White Nile provides fertile fields. The north of the country is covered in dry savanna and the south in tropical rainforests. South Sudan is a landlocked country near the equator. As a landlocked country, it has many neighbours. Sudan in the north, Ethiopia in the east, the Central African Republic  and the Democratic Reoublic of Congo in the west and Uganda and Kenya in the south.

Juba – the Capital of South Sudan 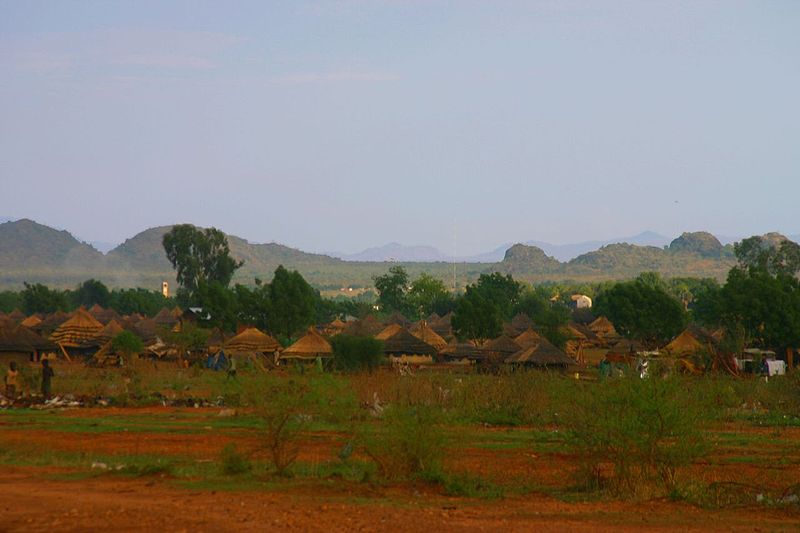 The capital city of South Sudan is called Juba. The city lies around 1,200 km south of Khartoum, the capital city of Sudan. Juba is on the western bank of the Nile. The inhabitants of Juba are trying to turn their city into a flourishing centre. They want to  create a new and modern South Sudan.

Dina, Nuba and 60 other African folk groups live in South Sudan. Most of them are farmers and live in small villages with typical straw-roofed round huts. A shared tradition of both the African and Arabian population are decorative scars. They have a specific meaning, which differs from group to group. 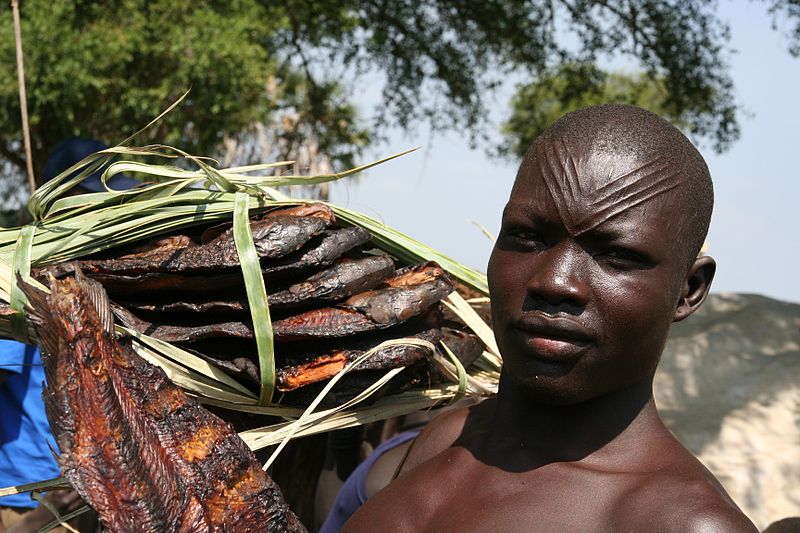 Schools are being built, but it will surely take a tong time till all children can attend school regularly. The population of South Sudan accept either African religions or Christianity. Child marriage is wide spread in South Sudan – almost half of all girls between the ages of 15 and 19 are married. 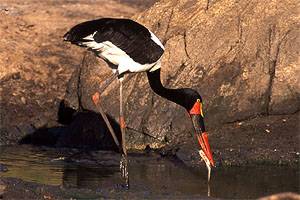 South Sudan today is a paradise for animals. National parks are being built and new cities are being designed to avoid the migratory paths of the large animal herds. A few migratory animals are being tracked with tracking bands on their necks so that their paths can be easier known. A national park in South Sudan is the Boma National Park. The white-eared kob, Nile Buffalo, tiang antelope, warthogs, hyhaena, lions, elephants, duiker, giraffes and hippos are only a few of the animals who live here. Many crocodiles live in the Nile. Its banks offer nesting sites for rare bird species such as the saddle-billed stork, seen in the picture on the left. 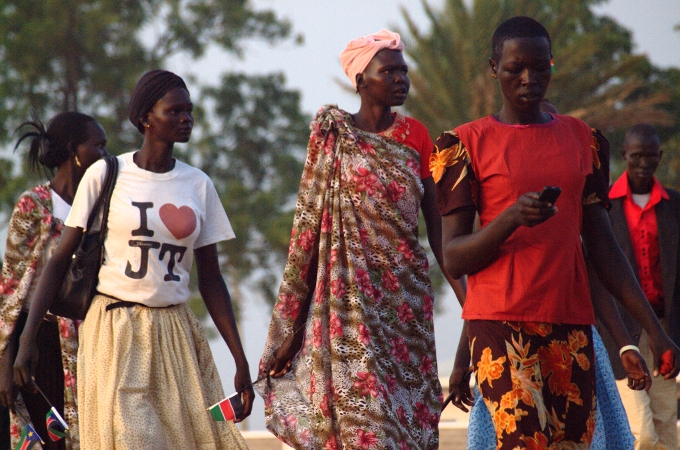 The name „Sudan“ originates from the Arabic word Bilād as-Sūdān which means „land of the black“. Arab folk groups in the north gave the country its name. They tried everything they could to islamise the black African folk groups. Most of the Arabs had a better education than the black Africans, had better paid jobs and could therefore easily exploit the natural resources of the land. This led to many Arabs viewing the black Africans as inferior. They disapproved of their customs, disdained their gods and disregarded their rules for community life. They extorted profit out of the labour of the black population. Sudan made use of slave labour right up untill a few decades ago.

The Struggle for Independence 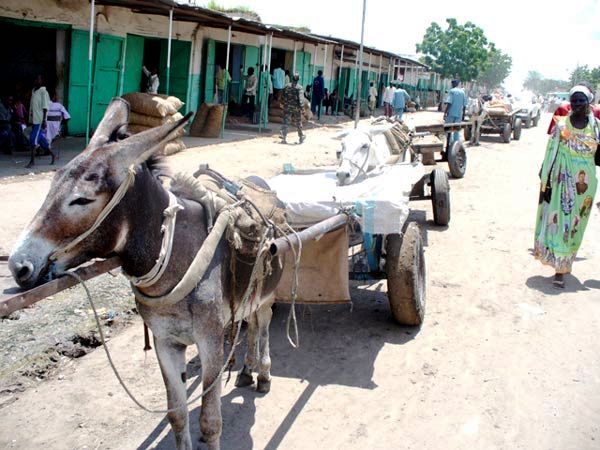 After the colonial period ended, conflict between the folk groups reached its peak. Arabian minorities won control over the entire country and tried to exploit ist wealth. The largest portion of natural resources were in the south of the country where most of the black Africans lived. A long, grim civil war followed. The first lasted from 1953-1972. Many people died and just as many lost their home. The war led to poverty, droughts led to famine. A peace treaty was agreed upon, but there weren't yet fair governement representation of those in the south.  A decade later they rose up once again and a second civil war devastated the country, lasting until 2005. The people became so impoverished that they could no longer buy weapons. Arabs, Muslims and black Africans sat down together and negotiated. They decided to let the people of South Sudan vote on whether they wanted to live in their own country. This is how there are two countries today: Sudan and South Sudan. Both countries are separated through ideologies, folk groups, the colour of skin and history. Only the water of the Nile, which bestows them both with fertile lands, unites them.

South Sudan – the Birth of a Nation 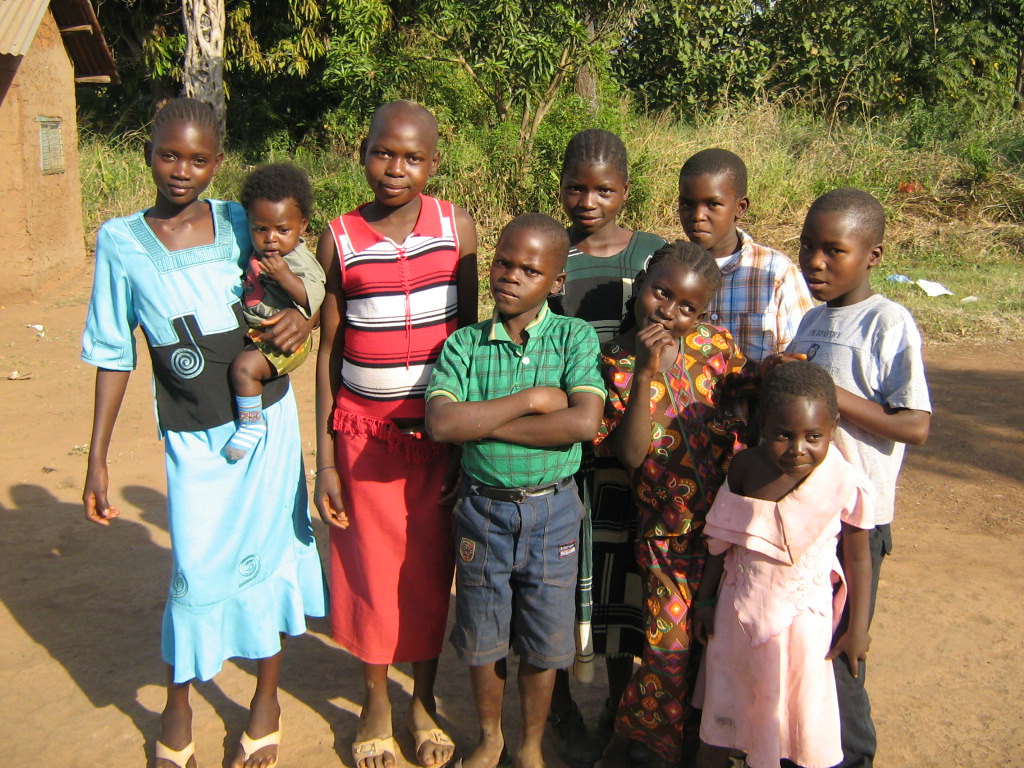 On the 9th July 2011, South Sudan demanded its independence from Sudan. This makes South Sudan the youngest country in Africa and also the world. In the beginning, war reigned. African folk groups from Sudan fought for 21 years against the supremity of the Arabian folk. The war cost the lives of more than 2 million people. War always means a failure of politics, an end to talks and a withdrawel of humanity. This is also how it was in Sudan.

The Future of South Sudan 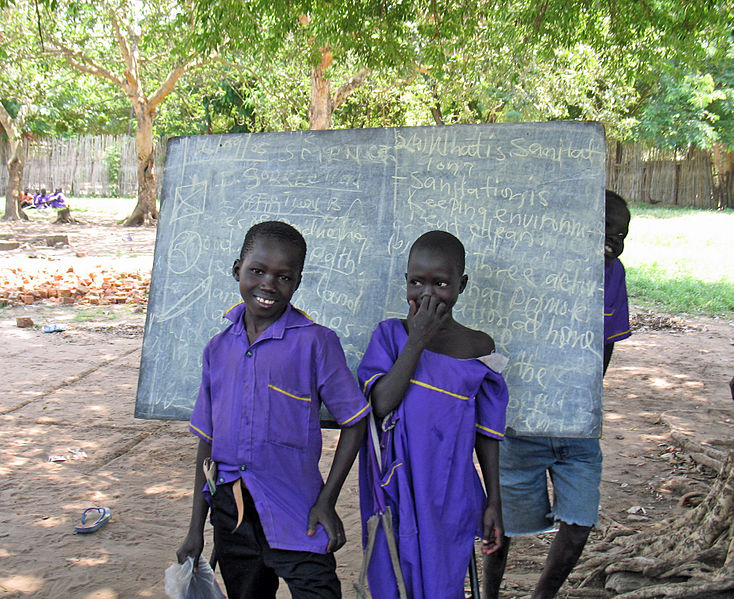 The motto of the newly formed South Sudan is „Justice, Liberty, Prosperity“. The young country has a lot of construction work ahead of it. They need to form their own government and health system, streets and sewage systems have to be built and schools and universities have to be established. Many Sudanese refugees are returning to their country to help with the construction. It is a tedious but exciting job for the inhabitants of the young republic. We wish them all the best.