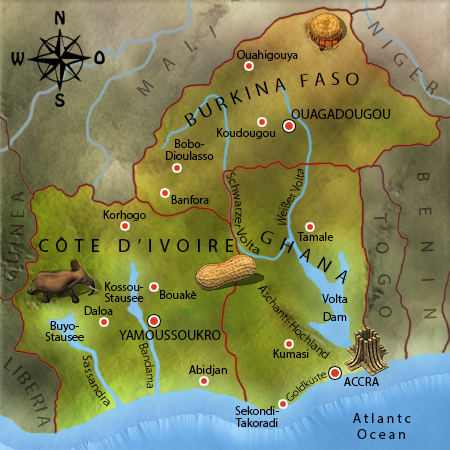 Ghana is a country in Westafrica. It once was called  "the Gold Coast", because huge amounts of gold were found in the ground and in the rivers there. On this gold the medieval kingdom of Old Ghana was built. Ghana is almost as big as Great Britain which ruled over the country during the colonial times.

Ghana lies at the Atlantic ocean. It is in the middle of the Ivory Coast in the west and Togo in the east. The country north of Ghana is Burkina Faso. Ghana is a tropical country with many tropical rain forest covering the highland. There are no four seasons like we have, but it changes between a rainy and a dry season. Since Ghana is situated near the equator, the nights are as long as the days.

The large blue spot on the map is Lake Volta. There is a dam keeping back the black and white Volta Rivers to form the Lake Volta. The Lake Volta is the biggest water reservoir in the world. There is also a strange lake in Ghana: the Bosumtwisee. It was made by a meteorite. It has no source, no inlet or outlet. Because of this the lake has a special religious meaning

Accra, the Capital of Ghana 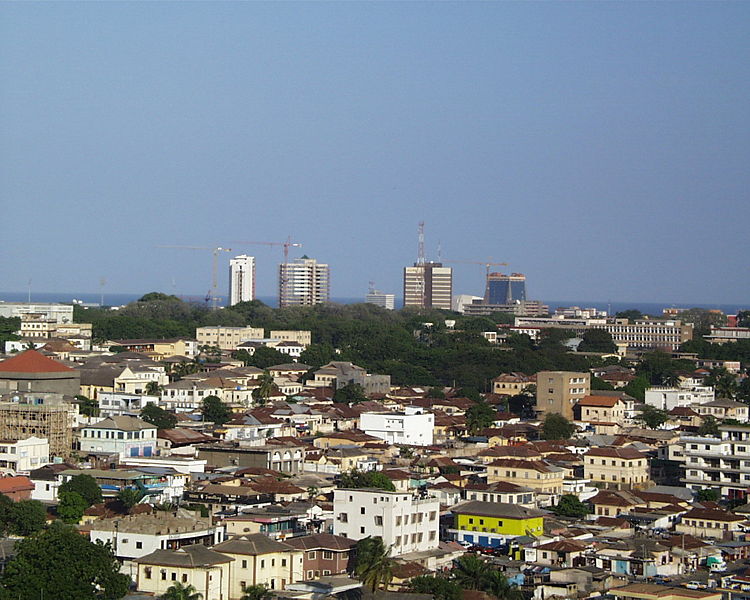 The capital of Ghana is located at the Atlantic ocean. It was founded by the Ga during the 15th century. At that time the first Portuguese traders came to Ghana, who wanted gold, ivory and slaves. The Ga were merchandisers who dealed with the Portuguese traders. Today Accra is a modern city with more than 2 million inhabitants. The city is surrounded by slums, in which the poor families live. Kumasi, the second largest town of the country, lies in the heart of Ashanti Region. 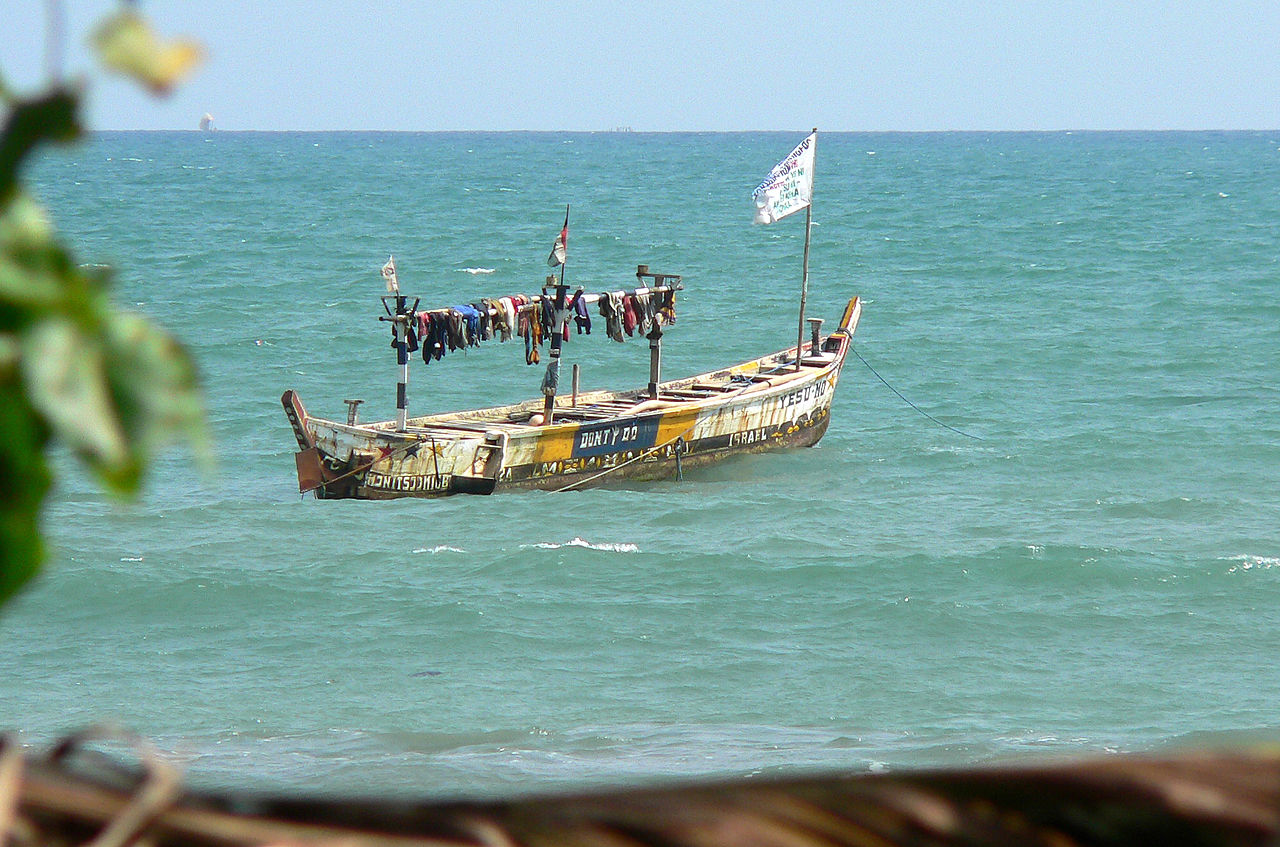 The most important sector for Ghana is agriculture, which employs over half the population. The country is the second largest producer of cocoa beans in the world. This means, half of the chocolate you consume, is made by cocoa beans from Ghana. Other agricultural exports include sugar, cashew and shea nuts, palm oil, cocoa butter and rubber. However, small-scale farmers who grow the cocoa can struggle to make enough money to invest in planting new trees and protect them against diseases. Once Ghana was called "the Gold Coast". Gold mining in Ghana is dating back to the 15th century. To this day, the country remains Africa’s second largest producer of the metal. Much of the gold wealth goes to the foreign mining companies. Other mineral resources mined in Ghana include diamonds, manganese and bauxite. Since oil reserves were found off the coast in 2007, Ghana expects an important boost to the economy. 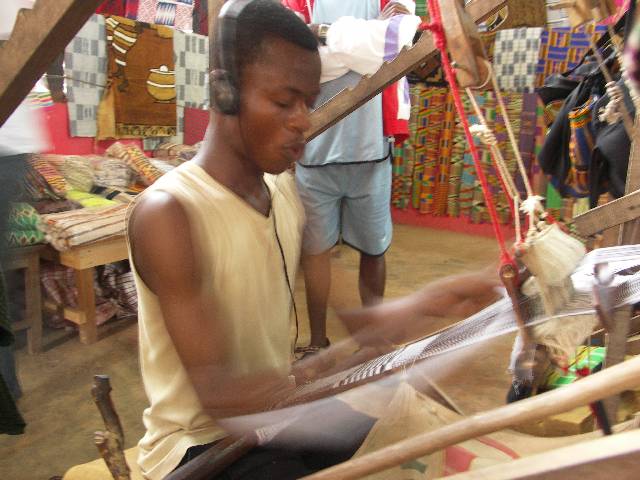 In Ghana more than 40 peoples are living  all speak different languages and dialects.The Akan people make more than half of the population. Women play a dominant role in the Akan society. Most of them are working and independent. The Akan are well known for their beautiful Kente cloth. Kente cloth has its origin in the Ashanti kingdom, and was adopted by many West African countries. The Ashanti are part of the Akan people. They live in Kumasi, the second biggest city in Ghana. They are well known for their old rites and their arts. Throughout Ghana, villages and towns are part of chieftaincies. It is customary for visitors to pay their respects to the local chief when they visit. The man on the right is weaving a kente cloth.

Did you know? Many Ghanaians have the same first name. The reason is, that the children are named after the day of the week, where they were born. A girl born on Friday is called Afia, boys born on Friday are named Kofi. 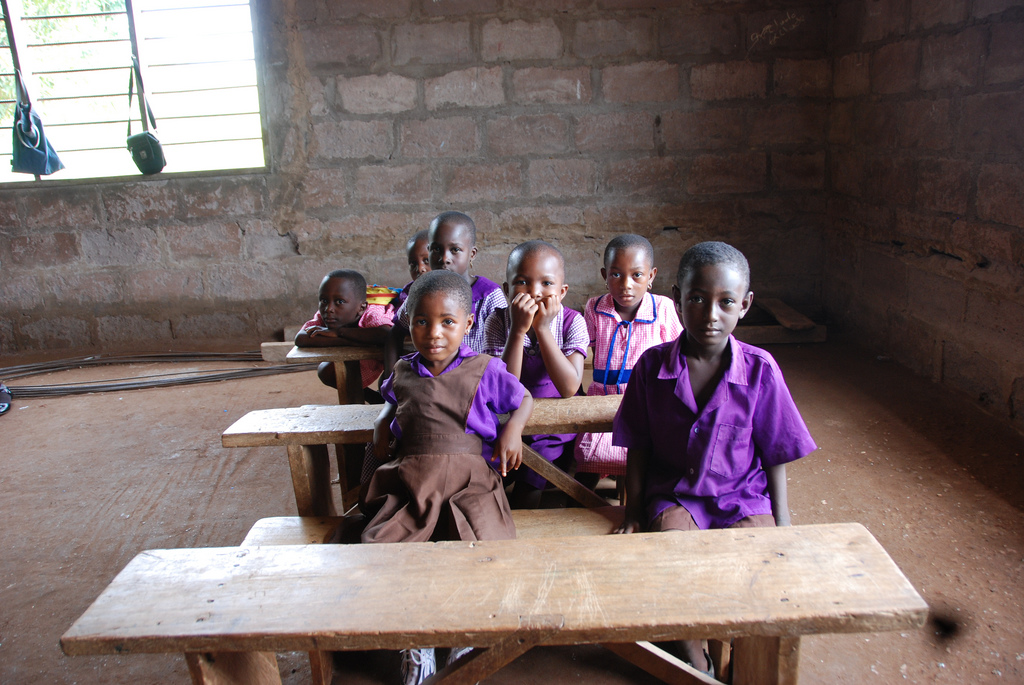 The Ghanaians see education as the key to developing the country. It is the only African country, where nursery education is compulsory. That means, at the age of four children go to a nusery. After two years of nursery, six years of primary education follow. There are no school tuition fees to pay and no other school costs. This means that families should only have to pay fees related to exams or parent-teacher assocations.In rural regions teachers are rare. This is why classes are sometimes overcrowded with 100 pupils.

What Children play in Ghana 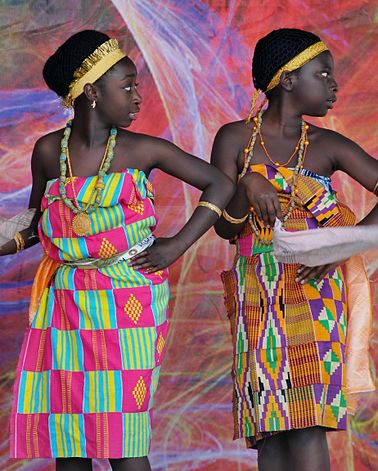 Football is by far the most pupular game in Ghana. Young and old viewers are gathering in the streets for public viewing, if an important match of the "Black Stars",  is announced. The national football team of Ghana has won the African Cup several times. At times of important matches, the children get free of school. The girls like to train traditional dances, in Kente cloth of course, which are sewed by their mothers. 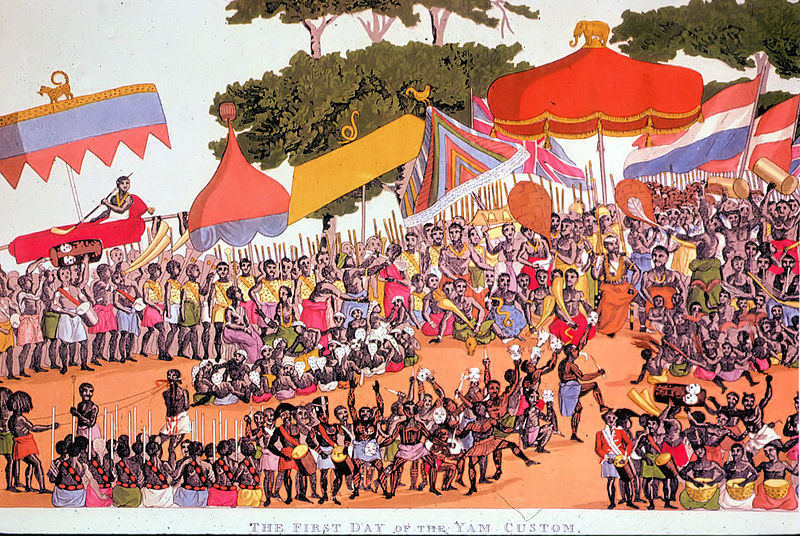 There are many festivals held in Ghana. Birth and death, victory and defeat, hunting or harvest are all reasons for a celebration. Guests are also welcomed to join in the celebrations. In Ghana almost every day of the year is a celebration. Besides Easter, Christmas and New Year, an important celebration is Independence Day on 6th March.

The Animal Kingdom of Ghana 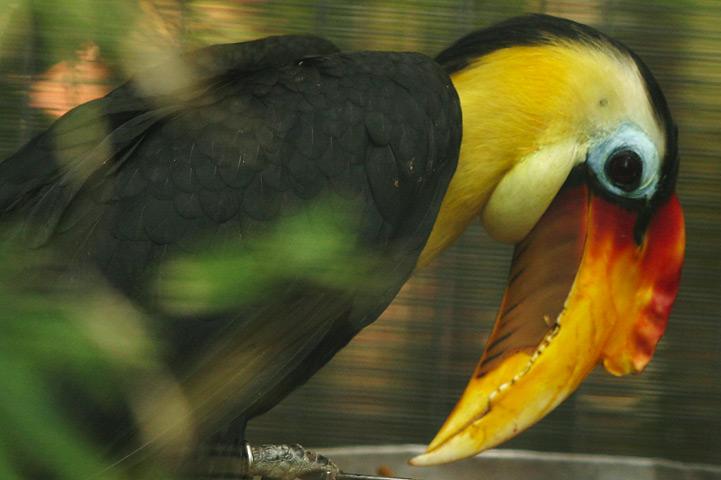 One third of Ghana is covered with forests. The colourful hornbill is living in the forests as well as a great variety of all kinds of snakes, geckos, turtles and insects live in the rainforests. Have you ever drunk milk from a Water Buffalo? Water buffalos are kept as domestic cattle in northern Ghana. Their skin is made into leather and their milk is sold and drunk. The northern savannas are the home of monkeys, hippos, rhinos and elephants. Animals such as antelopes, lowland antelopes (known as bongos) and  giraffes can be seen, and they are hunted by hyenas, leopards and lions.

More on animals of the rainforest 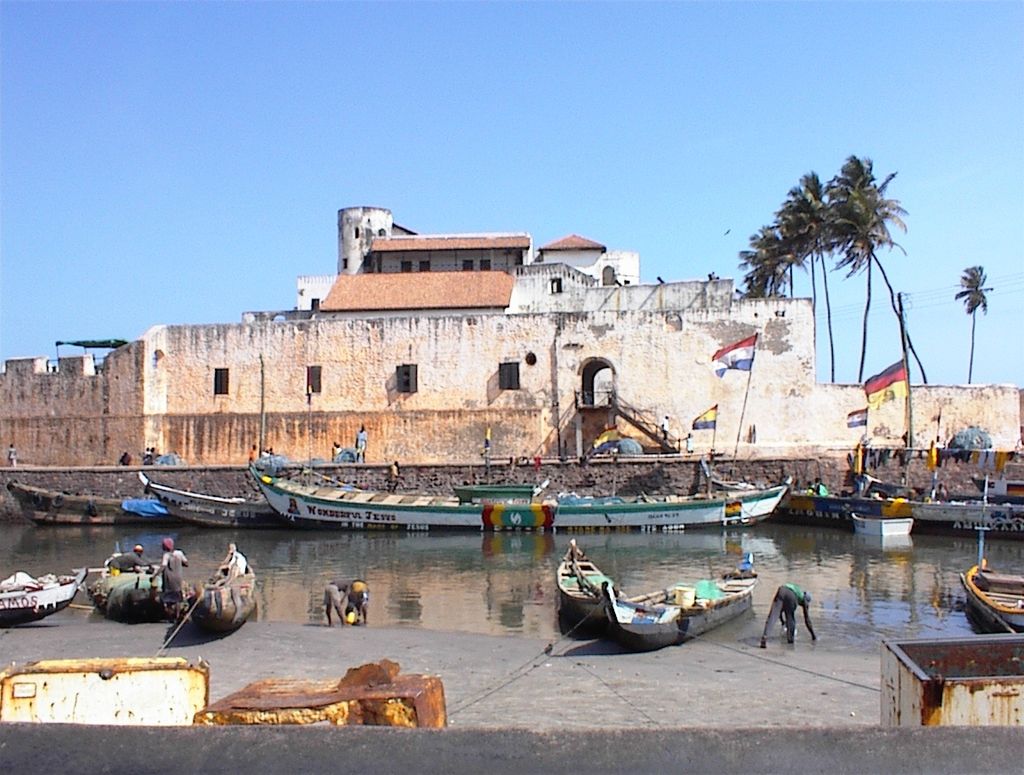 Ghana’s beautyful beaches are drawing visitors into the country. But also its history and cultural heritage can be explored. Ghana’s coast is dotted with old towns and forts, which tell about the colonial past. Three of the forts and castles built by the European traders – Elmina, St Jago and Cape Coast – are classified as World Heritage Monuments by UNESCO. Worth a visit is the Kakum National Park, located north of Cape Coast. It is consisting of undisturbed coastal forest. What is amazing about this forest: visitors can explore the forest via an amazing rainforest canopy walkway. This canopy walkway consists of six tree platforms that reach the height of 30 meters above the forest floor. It is one of only a dozen or so such walkways in the world, and is the only canopy walkway in Africa.

The Republic of Ghana is named after the medieval Ghana Empire of West Africa. The actual name of the old Empire was Wagadugu. Ghana was the title of the kings who ruled the kingdom. In 1240 AD, it was controlled by Sundiata and absorbed into the larger Mali Empire. The Portuguese who came to Ghana in the 15th Century found so much gold that they called the region Gold Coast. The longstanding traditions and cultural aspects of Ghana and its different people, helps to cultivate the region of Ashanti.

More on the Kingdom of Old Ghana

The Golden Chair - a Gift from God 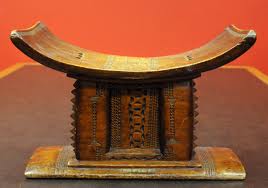 Chairs have a special meaning in Ghana. Everybody has a favourite chair and nobody would give his chair away. Sons are given a chair as a present from their father. A bride receives a chair for the wedding, and if somebody dies, they are sat on their chair until they are buried. After that the chair is put into a room where people can admire it. The legend of the golden chair is also well known. It is said that a long time ago a golden chair fell from the sky as a sign from God. It was regarded as sacred, and not even the kings of the Ashanti were allowed to sit on it. 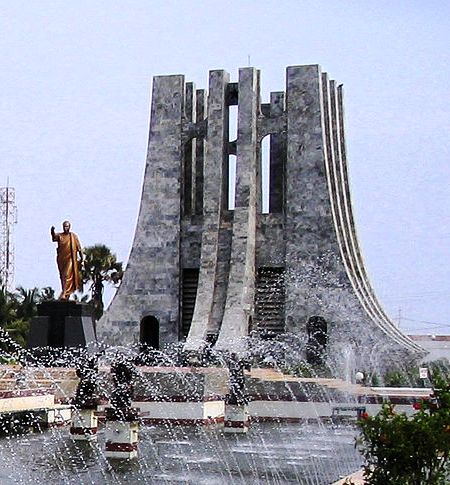 Ghana was 100 years under British control. Like most other British colonies, the Gold Coast was ruled indirectly; the British worked through local chiefs. They traded with the Ashanti people and participated in the slave trade. At the end of the 19th century the resistance to colonial rule emerged. People wanted to get rid of foreign rule. Finally, in 1957, Gold Coast became the first African colony to be granted independence. The most prominent freedom fighter was Kwame Nkrumah, who became head of the country. He improved the country's transport system and installed a modern education system.

Ghana is a modern, republic. Its peoples are known as open minded and very friendly. Ghana is a stable nation one of the most developed countries in Westafrica. Still gold is an important natural resource, which contributes to the wealth of Ghana. Ghana is also famous for its music, arts and celebrations. Ghanaians value education, the country is becoming well-known for its schools and colleges.