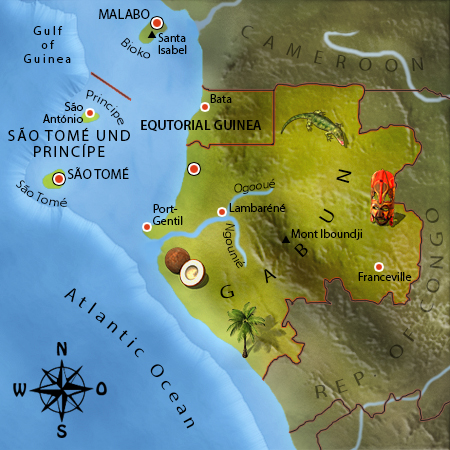 Bonjour, welcome to Gabon, the tropical country on the Gulf of Guinea!

Gabon is a small country in central Africa. It lies on the Atlantic Ocean and has one of the largest untouched rainforests in Africa.

Gabon is a Tropical Country

Gabon lies on the Gulf of Guinea. The small country sits between Equatorial Guinea and Cameroon in the north and the Republic of Congo in the south. Thanks to its position on the equator, Gabon has a tropical climate. You can see on the map on the right how the equator actually runs right through the middle of the country. Gabon got its name from the mist which sporadically covers the country like a hood. It was named 'Gabao' by the Portuguese when they discovered the west coast of Africa in the 15th century. This soon changed to 'Gabon'.

For comparison: Around 1,5 million people live in the area of nearly 270 000 square kilometers, which Gabon covers. This makes Gabon one of the most scarcely populated countries in Africa. 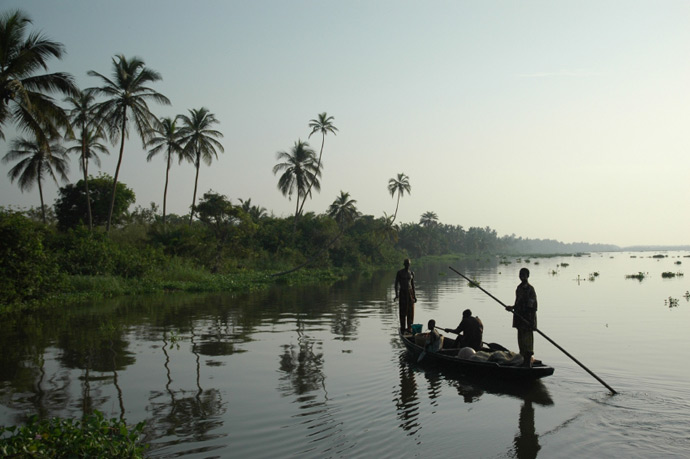 Gabon has many coastal plains and mountain ranges covered by natural rainforests. Natural forests consist of a wide variety of plants and animals and possess their own intact eco-system. Gabon receives a lot of rain – the rainy seasons are between January and May as well as between October and December. During this time, the country is veiled by mist, which rises from the forests. The streets of Gabon are made from compacted earth, so during the rainy season, the streets become so muddy that they can barely be driven on. The rivers are then the most important mode of transport. The largest river is the Ogooue, which with its many tributaries flows throughout the country.

Libreville, the Capital of Gabon 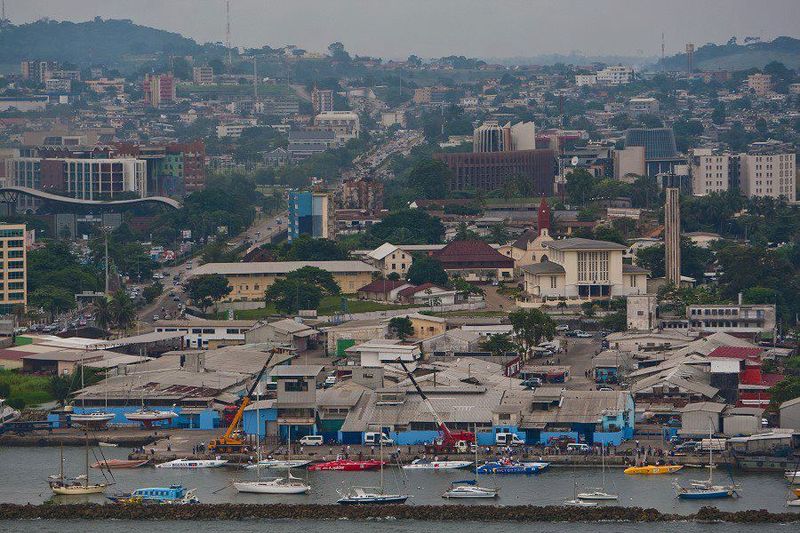 The capital city of Gabon is Libreville, a port on the Gulf of Guinea. It was established as a settlement for freed slaves in 1849, following the example of Freetown. This is where it got its name from, which means 'city of the free'. Some of the highlights of the city include the artist village 'Village des Artisans', which attracts art-lovers from all over the world, and the lively Bouet Market. Gabon became famous throughout Europe thanks to Albert Schweitzer, who built the first jungle hospital in Lambaréné. Since then it has become a large clinic in which many operations are conducted. 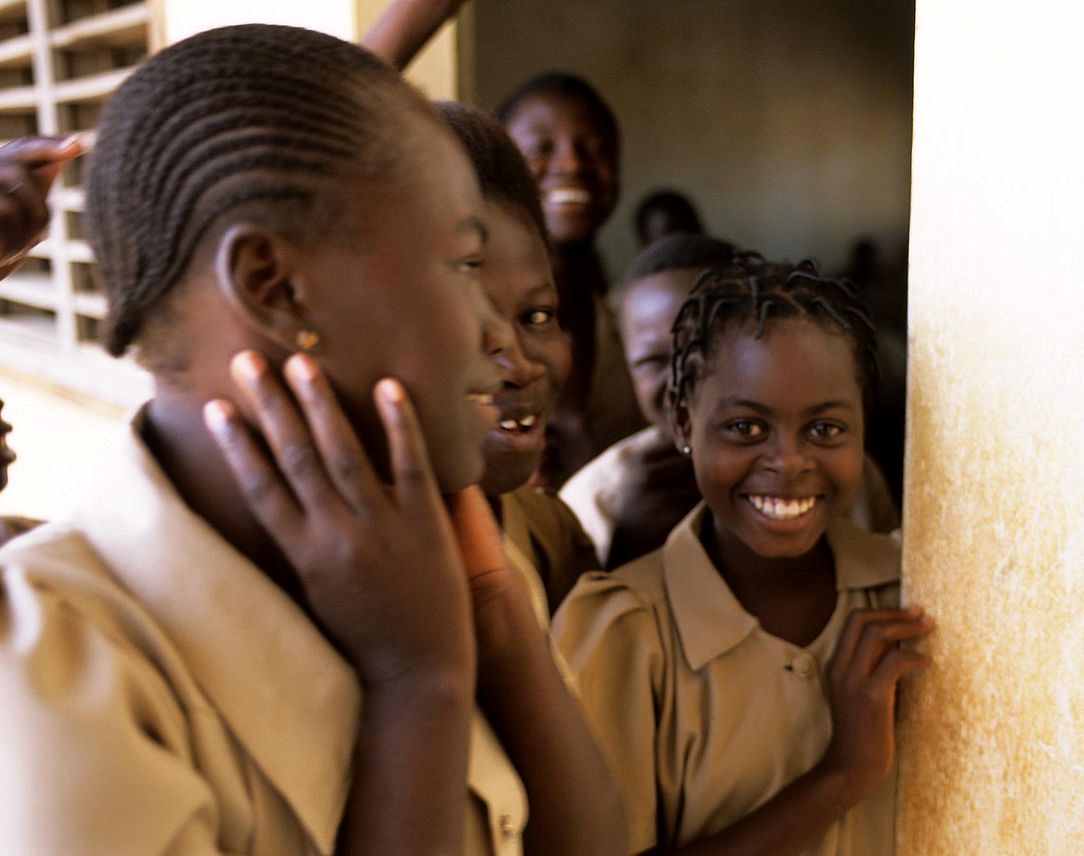 40 different kinds of folk groups live in Gabon. The largest are the Fang. They live as farmers in the rainforest. Wood carvings used to be treasured in the whole of western Africa. The people are known for their rich tradition and folklore. Before literacy spread in the 20th century, the oral tradition was a strong part of the culture. "Raconteurs" knew all about the history of the people, they recollected the old knowledge, the fairy tales and the wisdom of their ancestors. Before the French took possession of the country the inhabitants used bars of copper as currency. The oldest folks are the pygmies or "fire people", who are living in the rainforests. They have a broad knowledge of nature and live the same way as their ancestors did thousands of years ago. They have a bartering system with the Fang. Most of the people in Gabon are Christians, but many still follow their traditional African religion. The official language of the once French colony is French.

More about the Pygmies

Festivals and Festivities in Gabon

Different festivals are celebrated in Gabon according to the folk group, but they all celebrate weddings, births and funerals with dancing, music and festive food. In some regions, artistic masks are made which the dancers wear at the ceremonies. The Fang and the Kota are known for their artistic masks. Many inhabitants of Gabon also follow the Christian religion and celebrate Christmas and Easter holidays. 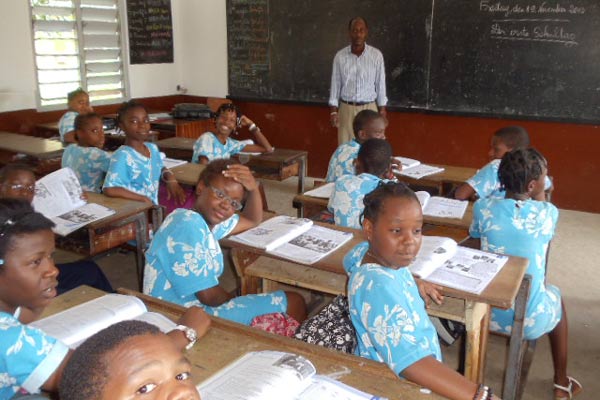 Many children attend Nursery schools and Kindergarden, befor the are enrolled in the primary schools. Almost all children in Gabon are going to school. It is compulsory to attend school until the 10th grade. The children get notebooks and textbooks.  This isn't always the case in Africa. The government has used the revenues from the export of oil to improve the schools. But then how comes that almost half of the people in Gabon are illiterate? School lessons are held in French, but only a few children learn French at home besides their African language. This is why many children become frustrated when they start school. Not only do they have to learn to read and do maths, they have to do this in a foreign language! Many children lose their motivation to learn and stop going to school after the first three or four years.

More about schools in Africa

The country is rich in crude oil, wood, uranium, iron ore and manganese, all commodities which are coverted in Africa. Gabon receives the largest part of its income from Oil. 325 000 barrels of oil are demanded per day, making the small country the third-largest oil supplier in Africa south of the Sahara. Most of the oil comes from oil fields 50 kilometer off shore, but some is also taken from within the country. Are the Gabons rich? Not all of them. 20 % of the population receive 90 % of the income. One third lives in poverty. 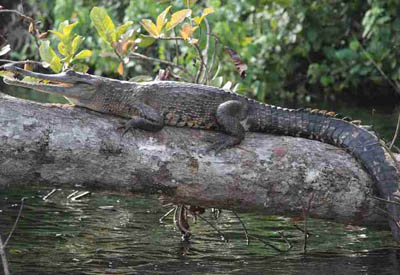 The tropical rainforests are the home of many animal species. With a lot of patience, you can see gorillas. There are lowland gorillas, mandrills, buffalos, wild elephants, antelopes and gazelles, as well as all kinds of snakes, frogs and other reptiles. A tremendous variety of beetles, insects and butterflies live in the rainforests. New species are constantly being discovered.

More about the animals of the rainforests.

Like many countries in the heart of Africa, Gabon has a mixed history. The Portuguese in the middle of the 15th century were the first Europeans who discovered it. It was another 400 years before the French established a colony here. In 1886, Gabon became a part of the then French world power. The country became independent on 17th August 1960.

More about the colonisation of Africa. 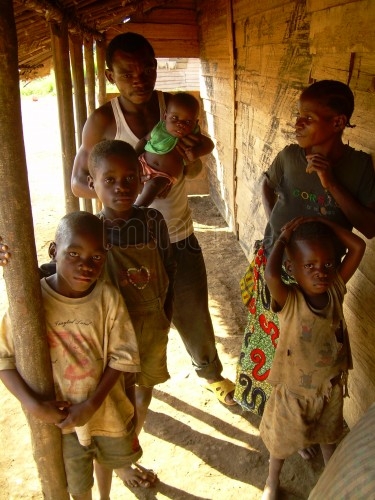 Today Gabon is a presidential republic. The president is elected for seven years and has a lot of power. He can make political decisions and initiate the change of laws. Despite the high concentration of power on one person, the country is stable in comparison to other African countries. Since it gained its independence, there haven't been any conflicts or civil wars. The press is free, journalists can publically tell what's good and what's wrong with the country. Besides tv and radio stations which are run by ministries there are also privately owned tv and radio stations, which are very popular. Many people live modestly, but in comparison to other African countries it is relatively wealthy.