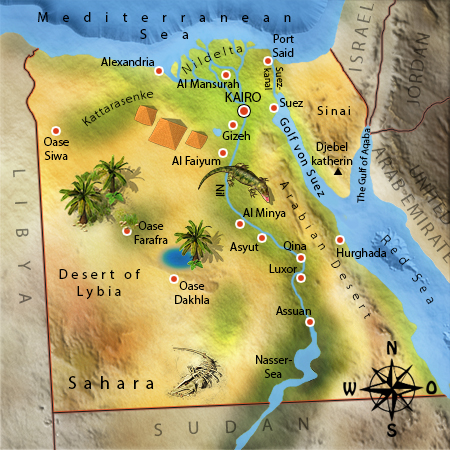 Egypt is a country between the Mediterranean and Red Sea. The country looks like a square with its long coast lines in the east and north and the borders in the west and south. The Sinai Peninsula rises between Egypt and Israel in the Red Sea. The northern side of the peninsula is made up of desert sand, while the southern side is mountainous and has the highest point of the country, Mount Catherine or Jabal Katrina (2629m). The Sinai Peninsula is separated from mainland Egypt by the Suez and the Suez Canal. The Suez Canal is a man-made waterway which connects the Mediterranean and the Red Sea.

More than 90 percent of Egypt is made up of desert. The Nile flows through the middle of the desert and separates it into the west, the Libyan Desert, and east, the Eastern Desert. The Libyan Desert is flat, with many gravel and sand plateaus. There are no rivers, so when rain falls, it collects  in the lowlands and forms salt lakes. The Eastern Desert is jagged with mountains and mesas with cliffs that drop down into the Red Sea. There are almost no people in the desert and almost no trees grow here, except Acacias, palm trees or thorn bushes. It wasn't always like this - a part of the Libyan Desert was once a sea.

It is very dry in Egypt and it rains very rarely, even on the coastline along the Mediterran Sea. The desert regions can go for years without raining. The temperature varies a lot. During the day, it can sometimes get as hot as 50 degrees and at night the temperature can drop by 30 degrees or more. It gets very cold on Mount Senai - in winter it snows quite a bit and the people collect the snowmelt for summer.

Cairo - The biggest City in Africa

The inner city is made up of a traditional part and a modern part. The heart of the young city is in the Tahrir Square. There are many universities, colleges, theatres, museums and monuments around the square. The Arab Spring, the revolt which changed Egypt, started here. The youth gathered here to protest against the old regime. The traditional Cairo consists of the area around the Al-Azahr Mosque and other Arabian chapels. Old Cairo lies in the south. Nearby is the City of the Dead, a necropolic, which is today inhabited and seems just like a normal part of the town. The old city of Cairo is a World Heritage Site because of its old islamic architecture.

The longest river in the world flows 1500 km from north to south through Egypt. It flows through the middle of the desert und is the life line of the country. It provides a traffic route and water, as well as fertile wet lands. A dam was built in Aswan to use the water flow as hydropower.  The Nile Delta has been providing millions of people with food since ancient times. Most of the population live in the Nile Delta and the Nile Valley, which is only 4 percent of the entire surface of the country. The fields of the Nile are some of the most profitable regions in the world. Cotton, maize, wheat, sugar cane, rice, fruit and vegetables are grown there.

North of Cairo the Nile splits into two branches, which continue to branch out. An extremely fertile delta formed here out of the fertile mud which the Nile deposited into it. The Nile Delta is more than 24 000 km², which makes it about as big as Baden Würtemberg. There is a lot of farming in the Nile Delta, but also quite a few industrial areas. But there is also still space for the hippos which have been living in the area for thousands of years. The water lever has sunken in the last few decades, as more and more water is taken from the Nile for irrigation.

Egypt is the fourth biggest oil producer in Africa. Gold, uranium, phosphate, iron, ore and natural gasses are also important export goods. A third of the population works in agriculture and in the production of agricultural products. Egypts cotton and textile industry provides the most jobs after the state. Many also work in the sugar, cement and fertiliser factories. A surprising amount of Egyptian work in tourism, for example in the hotel industry, as tour guides or they work in small workshops, where they make handcrafted souvenirs, jewellery and toys for tourists.

Do descendants of the ancient Egyptians still live in Egypt? According to the Copts (the native Christians in Egypt), they are they only ones who can trace their roots back to the time of the Pharaoh Empire. More than 90 percent of the inhabitants descend from the merging of the ancient Egyptians and the Arabian people. Arabians occupied and settled in Egypt in 642 AC. Over the centuries the families, cultures and religions have mixed with one another. Before the Arabian invasion, most Egyptians were Christian. A century later, almost all Egyptians converted to Islam. The official language is Arabic, but many Egyptians also speak French and English.

Of all the North African countries, Egypt has been influenced the most by Islam. The lives of men and women are strictly separated.  The woman's place is in the family and women are often veiled in rural areas. In the cities, young Egyptians  often wear a head cloth. Public transport is used separately by men and women and you only see men in the cafes. A positive development in this country on the Nile is that more and more emancipated woman are starting to have a professional life. Eygpt's population is growing fast. Every year about 1,2 million children are born, thereby putting a huge amount of pressure on the economy and on the densely populated residential areas.

School in Egypt is compulsory and tuition is free. However, only two thirds of the children of poor families go to school. Usually, it's the girls who stay home. They help with the fieldwork and are prepared for marriage and family life from an early age. Schools are usually administrated quite authoritarian and school boards are only being established now. Even though going to school has been compulsory for over 50 years, half of the population can't read and write. Like in other North African countries, there are also Egyptian Islamic Madrasas, schools for the studying of the Islamic religion. One speciality is the Al-Azhar University in Cairo. It has existed since 983 and is a centre of Islamic learning.

Many Eygptian children have to work after school, so there isn't a lot of time left over to play. The boys’ favourite game is football. A few games are loved by all children, for example the 'Snake dance'. One child stands inside a circle. The other children kneel outside the circle and try to catch the feet of the 'snake dancer'. Whoever catches a foot is the next to stand in the circle and dance.

The Animal Kingdom in Egypt

The animals in Egypt are filled with waterfowls in the Delta area and on the Nile. Herons, cranes and wilde geese live here and in the winter months. Many European migrant birds join them. Birds of prey, such as vultures, hawks and milvus are indigenous. In the deserts there are jackals, hyaenas, wildcats and desert foxes. Many kinds of small animals also live in the desert, like rabbits, jumping mice, lizards and scorpions. The Egyptian Cobra is indigenous to the rural regions of the Nile. Nile crocodiles, which in ancient times could be found all over the Nile, are now almost only found in Lake Nasser. There are almost 200 different kinds of fish species in the Nile and in the lakes on the coast.

More about the animals of the desert

Egypt has a long and rich history due to the river Nile and its fertile banks. The first Human settlements date back to 40,000 before Christ. Here is where the Pharaoh Empire began in 3000 BC, one of the earliest advanced civilisations of the ancient world.

After the Pharaoh era, Egypt experienced many kinds of foreign rule, starting with the Romans who colonised Egypt and later on the Arabians, who conquered the country. In the 16th century Egypt was conquered by the Ottoman Turks. Even Napoleon led a French army on Egypt land. After the French left there was a power struggle in Egypt. In the 19.th century foreign rulers began to modernize the country. The Suez Canal, a postal service and railways were built. Egypt only gained its independence in 1936. Throughout its long history Egypt has had  a large political and cultural effect on the Arabic world.

More about the Pharao Empire

Egypt today is a Country in Turmoil

Egypt is an Islamic country. Islam was declared the official religion in 1980. The government was authoritarian, there was no freedom of press, and human rights were taken little notice of. So it is no surprise that the Arab Spring also influenced Egypt in 2011. The old regime was overthrown. A new governemnt was formed and the Muslim Brotherhood came into power. But not that much has improved in the country. Today still there are power struggles between the Muslim Brotherhood, militarian leaders and democratic forces, who want to form a secular governement.